Raleigh’s health continues to be a puzzle to me. His appetite comes and goes, without consistency. Yesterday morning, he wanted no food at all, and I had to force his Prednisolone tablets into him. Later that day, he ate well, and this morning, he wanted enough food to put his medicine into.

I spoke with his doctor yesterday; I asked if Raleigh’s Prednisolone dosage, recently increased, might have something to do with his inappetence. The veterinary agreed it might, and we decided to reduce his Prednisolone to the previous level: one tablet in the morning and half a tablet in the late afternoon or evening (depending on when he eats dinner.) As long as it controls his stomatitis, the lowest possible amount is the most desirable. Though Raleigh has not been constipated - at least not to the same degree - since last week, I thought about dosing him with laxative, of which the doctor also approved. I will talk with her again on Monday.

It is not just Raleigh’s apathy toward food that concerns me; it is the degree of apathy. Some days, he will want to eat, other days not at all; then again, he may want food but only a small amount. He is inconsistent. As well, he has little interest in playing. Yet he is responsive to other things. He enjoys being petted and having his chest rubbed; our together-time after snacks in the evening continue. He also still likes smelling the fresh air, and looking outside. And I am hearing his purr now; it is stronger and more open.

This may all be a long-lasting infection of some sort, due to his FIV. The doctor noted no fever when Raleigh was at the hospital, but that was two weeks ago already. The Peach had been sneezing (tiny eruptions that sound like a human saying “phht”; fifteen or twenty of them in a row), and his eye is now running a bit more than it has been. What medicine can find has been found, so there is no point to another doctor’s appointment. I will watch and listen, and try to understand what the little fellow is trying to tell me. Perhaps he and I can discover something that has been overlooked. 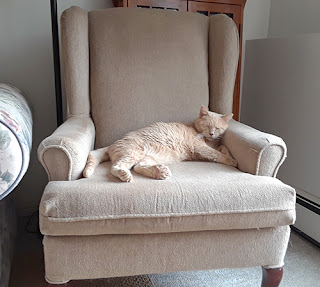