Raleigh continues to fight whatever it is he is fighting. His appetite is still slight, especially in the mornings. I spoke again with his doctor and we discussed the possibility of a respiratory infection. The evidence for this is Raleigh’s breathing, which is more rapid than normal, and some dark discharge from his right nostril, which has turned crusty. His left eye, which oozes clear sometimes, has turned dark. As well, he had a cold last week which, though it didn’t last, may have led to something more tenacious.

Initially, I feared that Peachy’s accelerated rate of breathing was due to pain, so Sunday I gave him some Gabapentin, to ease any discomfort. He did improve, but he did not relapse after the drug’s effect should have dissipated, so I don’t think now that he was in pain. Whatever is ailing Raleigh seems to assail him worse in the morning and relaxes its grip during the day.

For now, in addition to his Prednisolone, he is receiving AventiClav anti-biotic. Unlike the former, the latter has a flavour (you know, the kind that drug manufacturers market as being loved by cats), so Raleigh will not eat it in his food. The pills have to be forced into him.

Through it all, however, my ugly spaniel has maintained a friendly hopefulness, despite forced feedings, and oral injections of drugged water, laxative and other unpleasantries. He is still willing to trust me, which I find incredible. He has taken to lying on my lap again; I think he finds comforting. That makes two of us. 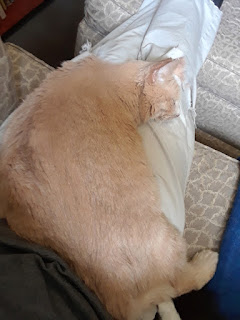