Almost exactly a year ago, Cammie had a stroke. Tonight, she had another.

I was cleaning the bedroom at about seven-thirty when I noticed the princess wandering about. She will leave the bedroom when I clean it and explore the rest of the apartment, taking the opportunity to see what is new. This time, she was walking in circles, and dragging her right rear foot. She was clearly disoriented.

I called the emergency service of my veterinary hospital and was able to talk to a doctor within minutes. There was, in truth, little that could be done; there is no way even to determine if Cammie had had a stroke, except by the signs I had already witnessed. (Last year, Cammie was described as having had a ‘stroke-like’ episode, due to the several possible causes for her condition.) However, the doctor told me to look for symptoms of shock, and pain. I have Raleigh’s Gabapentin still, and we figured out a dosage for Cammie to take, if need be.

Cammie did not appear to be in pain. She had settled under my desk-chair; it is of wood and its legs are connected by horizontal spindles. I think Cammie may have been comforted by this enclosure; soon after, she limped her way to her cat-bed. Her breathing, at first more rapid than usual (though not frighteningly fast) had decelerated, and she had not breathed through her mouth at any time.

She has been in her cat-bed since, but has displayed encouraging signs. She purred as I stroked the back of her neck and talked to her. She has changed position a couple of times, and reacted by withdrawing her paw when I touched it (she dislikes having her feet touched), which she did not do immediately after the incident. She has yawned (which, for some reason, I equate with normalcy) and looks fatigued, rather than injured. But her early attempts at ambulation have merely led her in circles.

I am tempted to write that my princess, jealous of the attention being given to Raleigh, decided to reclaim the limelight. In fact, a second stroke was always a strong possibility. That it did not transpire earlier was, perhaps, luck, more than anything else. As I watch her reaction to this second assault on her system, I can hope only that her luck resumes, and that she recovers completely. 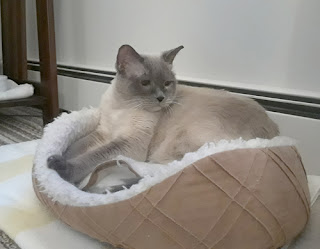