Devon, the Fourth of My Three Cats

No, my arithmetical skills aren’t suffering. I still have three cats, but, for the moment, I have a fourth. His name is Devon.
Devon arrived on the last Friday of August. I had been contacted by the PAW Society a couple of days before that, asking if I could take a cat in as he had no where else to go. Devon had been living in a foster-home with a woman who had taken excellent and affectionate care of him, but who was moving to a new home which didn’t allow pets. This was very short notice. I considered the situation at my apartment to be still in transition, with Ren, also a foster-cat, having come to me exactly three months previously. He was still getting used to his new home, and certainly my two permanent cats were still getting used to him. However, Devon was an emergency, so I agreed to take him in. 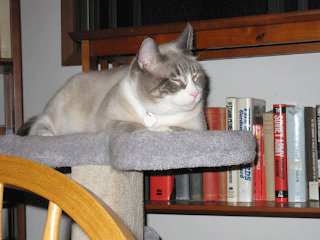 What a wealth of personalities cats have – if, as a friend wondered, ‘person’ality is the right word. I suspect that as one advances in the evolutionary chain of species, the more character each species has. Dogs and cats are the most easily observed by humans, for obvious reasons, but horses and other farm animals have, I’ve been assured, distinct traits that could be described as personalities. Devon has demonstrated to me yet another in a cat.
He was shy at first, and I made him the usual hiding spot behind the bookcase in the library. He used it once. Then he made it clear that he was an explorer; true, a timid one, cautious, and ready to run back to the base camp at the first sign of trouble. But his expeditions became longer, and if he was driven back to his safe spot, he left it again a minute later. He wanted to see this new environment. First, of course, he examined the library – and me. He didn’t find them stupendous, but neither were they completely without interest.
Since every cat is different, so too is their method and speed of integration into a household. I had a feeling that Devon wouldn’t benefit from being cooped up. As early as Saturday, I let him out into the wider apartment. The three cats already here spent the majority of the day staring at him. No doubt intimidating for the newcomer. But I was most worried about Ren. He is new himself, and I was anxious that he would feel threatened. Tungsten was simply getting fed up with these new cats coming and going, so one more was just another to growl and hiss at for a while. Josie was intrigued but, as she does, wanted to keep her personal space inviolate.

But things have proceeded more smoothly than I had anticipated. By the next day, all three cats already resident were returning to their routines. True, Devon upset them whenever he appeared. After all, one can’t relax completely when one must swat at a new cat and threaten his life. After initially respecting the hierarchy, Devon then tried to get the others to play. He would chase the girls and jump on Ren when he wasn’t looking. This was not appreciated, and even the gentle Josie grew annoyed, growling in a particularly cranky manner.
That phase passed and, though it’s still early days, Devon is taking a more measured approach, settling for sniffing noses, or slowly approaching one his new roommates rather than charging in. So far, the situation is reminiscent of Ren’s progress. And, except for a short period when Tungsten hissed at Ren as much as at Devon (“I hate you, new cat,” she seemed to say, “and I don’t yet care much for you, either, Ren, while I’m at it.”), the apartment is remarkably peaceful. As cat-owners know, however, that may change tomorrow.
To humans, Devon is friendly and gentle. It didn’t take him long to roll over (a la Ren) to get a chest-rub. Unlike my big boy, though, Devon likes to play Nibble the Finger. Tungsten will do that as well sometimes, but, eight years older than Devon, she has fewer teeth, and those she has are duller. But Devon means no harm and never breaks the skin. He does indent it somewhat. What’s important is that, like Ren, he appears to want to be friends with people, and that makes a great pet. He likes to play, whether by himself or with others. He especially loves his squeezable ball with which he rolls about.

Devon is a strange-looking fellow, with the most uncat-like face I’ve seen on a feline. He’s obviously part-Siamese. The colouring of his fur and much of his wide countenance resembles that breed. But one of his parents was just as obviously from a bulkier sort. Devon isn’t heavy, though: a compact and strong little body. He’s energetic, running as much as walking, and throwing himself into play-time with enthusiasm. I realised today that only Tungsten of my cats makes a sound that approaches a meow. Devon issues squeaks and squeals closer to a dolphin’s ‘ack’ than a cat’s sound – but he’s the quietest guest you’ll ever have in your home. His tail is short and bent, and may have been broken at some point, though it’s still full of life, and his eyes, which show a tinge of red in the pupils in certain light (and in every photograph – when he doesn’t close them all together) are crossed.
Devon has now been released from his incarceration in the library, put there every night to sleep and let out when I go to work. Until then, he had spent his day, no doubt bored to tears, isolated, but safe. I counted the cats before I left that first morning of freedom; I hoped to have the same number – and in the same condition – when I returned. So far so good. 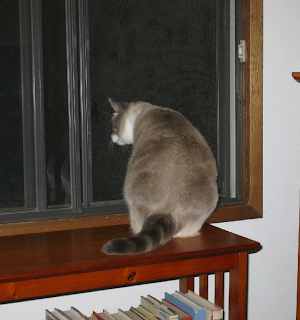