The Spirit of Morris

I have at last devised a formula for getting my cats to eat a decent amount of soft food. This is perhaps the fifth or sixth winning formula with which I’ve come up in the three short years in which I have had cats living with me.
As cat-owners know, Morris, from the 9Lives brand commercials, is not that much of an exaggeration. It’s true that most real cats don’t give voice-over narrations to their lives, but otherwise, real cats are as finicky as Morris, who won’t eat anything but 9Lives. One may wonder why his television owners bother having him try anything else. I don’t. I’ve been attempting to get just the right mix for a long time.
All four of the cats living with me like Fancy Feast, to varying degrees. Tungsten doesn’t eat much as it is, but she seems to enjoy that brand. Why don’t I simply buy a pantry-full of that, then? Well, I don’t have a pantry; beyond that, I don’t think Fancy Feast is the best soft food to feed cats. The ingredients list a great many chemicals and dyes which, not good for humans in the food we eat, aren’t any better for cats. And just as humans find that the best tasting food isn’t always the healthiest, so it is with pets.
I have tested numerous kinds of food on my animals, and in numerous combinations. I don’t care to do that, because a constant change of diet can’t be good for them. I have found a brand called Wellness, the turkey and salmon flavour of which seems to appeal to the majority of them the most.
One of the problems is that, being fussy, like the fictional Morris, few of them will eat Wellness after the tin has been opened and the contents refrigerated. I’m uncomfortable with simply leaving the remains of an opened tin in a cupboard, uncooled, until the next meal-time. The others would be unaffected by any mild spoliation that occurred, but Josie has a very sensitive stomach. In case one thinks I’m being too considerate, one must remember that a vomiting cat has a practical affect on its owner’s time and activities. And his carpet.
Fancy Feast is a favourite even in an open tin and out of the fridge, though the best scenario is a new tin of that brand at room temperature.
It is, strange to relate, the fact that I am now caring for four cats that has resulted in the best solution to the food problem so far. A tin of Wellness, which is a denser food than others, will suffice for four feline dinners. Even Josie will cry for her plate of newly opened Wellness, and Tungsten, my tiny-eater, does a good job with her portion. Having Ren and Devon present and hungry will help empty a complete tin. That solves the refrigeration dilemma. For the cats' evening snack, provided at about eight-thirty or nine, I serve out a portion of Fancy Feast which, as I mentioned, is enjoyed even from an older tin, and therefore I needn’t give it all out at once, and can refrigerate the remains for the next day.
One may wonder what all the fuss is about. After all, I also serve hard food, California Natural, which is reputedly a very good brand. All the cats crunch away at that, and, indeed, they get most of their nutrition from it, I imagine. But cats never seem to get enough moisture, which of course is vital. My cats are no different: they don’t drink enough water - they want less than they need - so obtaining it through soft food is important. In turn, finding the right incentive and/or combination to get them to eat that soft food is also important, even if one must resort to less than the best brands.
Besides, if one saw Josie hurrying in front of an approaching dish of soft food, squeaking with delight at the prospect of her imminent dinner, one would know why I like to give my cats something they enjoy. 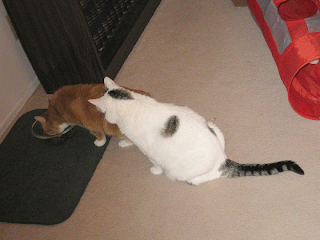