This past week has been a troubling one for Tucker. The visit to the veterinarian went well, and Tucker returned with fewer teeth and a good chance for healthier gums. Later came a problem.
Tucker has always been sensitive. When he first came to live with me, he became despondent and refused to eat or drink for four or five days, having to be force-fed during that time. He eventually recovered and became a happy cat who seemed to enjoy his new home and roommates. 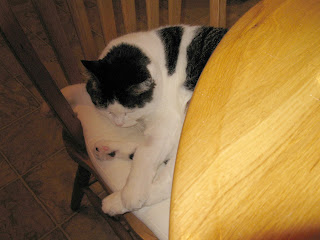 I had expected trouble because of this sensitivity but it took a form that surprised me. In his anxiety, he started cleaning a portion of his rear end, and cleaned it so often and so vigorously that the fur was worn off of it, and the skin beneath became raw. I didn’t notice it until a few days into the problem.
In response, he was equipped with a funnel-shaped collar, to prevent any more attentions to the area, and some ointment, called Hibitane. The past few days have been unpleasant for Tucker. At first, I refrained from putting the cone on him overnight, so he could have a decent rest, but he tended to abuse the privilege and continued to lick himself. Now, he wears the cone all day and all night, except for a few minutes under my direct supervision, when I give him some relief from it. He can’t drink properly when the cone is on, nor can he groom himself, so I take it off for a little while in the evenings, as long as he doesn't try to lick where he shouldn't. When he eats, the poor boy looks like a vacuum cleaner. 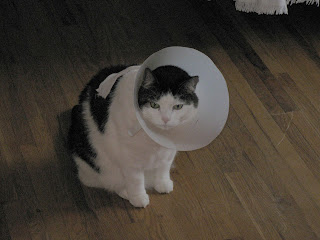 In the meantime, he is unhappy. The cone often creates a state of semi-paralysis in which he will lie still, facing a wall or a piece of furniture. When he started to move after the first time the cone went on, all I heard was clunk...clunk...clunk...as he crashed into one object after another. His whiskers and peripheral vision have been neutralized. 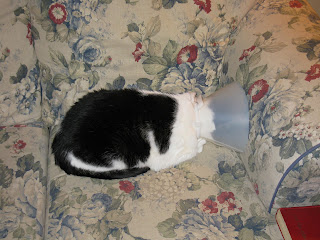 However, he is making efforts. He has even ventured downstairs, which is hazardous with the cone. He came into the bathroom Saturday night while the tub was filling. That’s usually Tungsten’s time to spend with me, but the new boy wandered in (clunk...scrape...clunk) and the orange one actually tolerated him lying next to her. Then Renn came in to watch the water run... 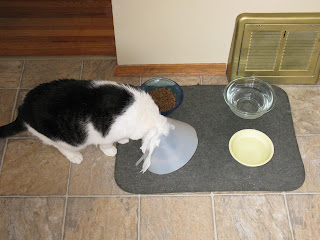 Tucker goes to the veterinarian again on Wednesday, because the Hibitane prescribed has proved ineffective. I think the anxiety over visiting the doctor the last time is gone, and the drive to lick where he shouldn’t is now physical for Tucker. I hope that that will repeat itself, so that once a new medicine clears up the raw spot, Tucker won’t feel the need to attend to it any more. 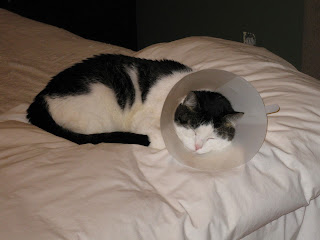 In the meantime, the other cats are doing well, though no doubt wondering why their newest roommate has a big funnel on his head. 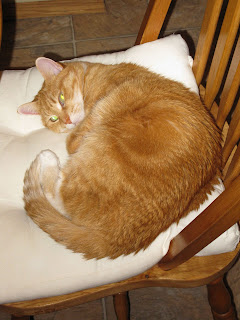 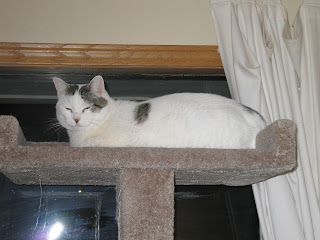 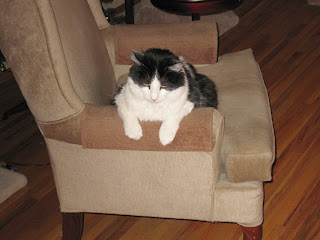