Cats love to sleep. Perhaps they need it. Perhaps they are lazy. But they certainly seem to enjoy it. I wish I could sleep as often and as easily as they. They can sleep almost anywhere and in almost any position, like human babies. If I tried sleeping the way I see my cats sleep, I’d wake with permanent disability.
I like watching the cats sleep. It’s peaceful, again, rather like watching a baby. Neither have anything weighing on their consciences to keep them awake, as do many people, so they rest content - except when one has a bad dream, as my Tungsten does from time to time. But usually they're serene, with perhaps a little twitch of a paw here, a little whimper there.
The cats I have each possess certain ways of sleeping, habits as to how they rest. Tungsten curls up. There’s hardly anything to her anyway, so she can bend her little body right around in a circle. When she’s lying on my lap, she will often curl around my hand. She may like the warmth of it, though since cats’ body temperatures are higher than humans’, I wonder if I feel cool to her. Sometimes, she will lie straight, looking as though she’s sleeping where she dropped. And at night, in bed, she’s up by my head, almost in my face. She likes to rest her rear legs in the palm of my hand. Lately, he’s taken to holding my hand in place with one of her forepaws, and even twisting about so that her rear legs and her head are in my hand. She must like her head resting in the curve of my palm, since she will do that once in a while when she’s on my lap. Periodically, Tungsten will cover her eyes with a front leg; she likes to be able to adjust her amount of light. 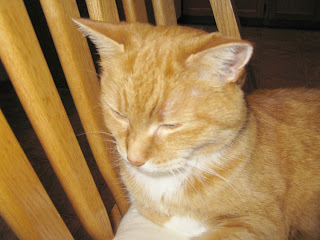 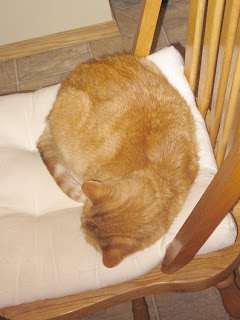 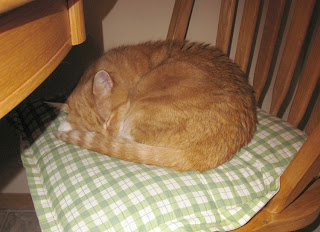 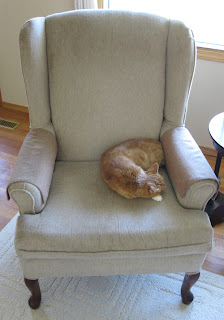 Josie can’t curl much. She’s too round as it is. But she likes to form a semi-circle. Her favourite places to nap now are on an armchair downstairs in the library and of course on the top of the sitting room cat-trees, the taller one for preference. Now and then, she can be found on the cat-tree in the bedroom, but that’s where she will go to be alone and rest her eyes in the dark; she rarely is asleep there. Unlike the other three, Josie can look half-asleep sometimes, dozy, as though she is on the verge of the dreamless. At night, when she decides to join the rest of us on the bed, she will lie on my near side, against my ribs. I like to feel her solidity there; it’s comforting. 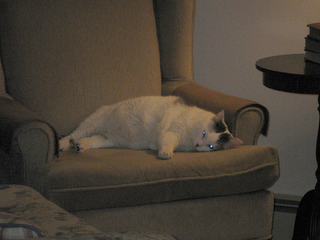 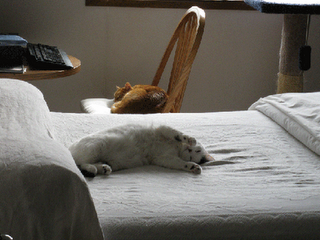 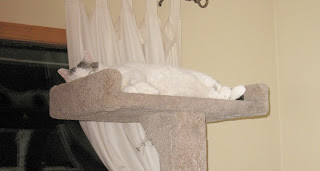 Renn is a versatile sleeper, even for a cat. He can sleep curled up or straightened out, on his side, on his back or on his stomach. He doesn’t seem to have a favourite position, though for deep sleeps, or at least long ones, the circular formation seems the best. He will throw himself onto his back and slumber with legs apart, the closest a cat can come to being spread-eagled. That position is especially good for when he’s on the couch, though sometimes he will appear reclusive and curl up in a corner of it. But when I’m sitting there, he will frequently lie on his side next to me, and enjoy having my hand on his chest. That’s comfortably warm - for me - on cold winter evenings. He uniquely lets out a long sigh once in a while. I don’t know if he’s content or wistful. At night, he is at the foot of the bed, on the far side, just a short jump from the windows and the cat-trees there. He will wake and leap over to make sure our little kingdom is safe, then come back to bed. 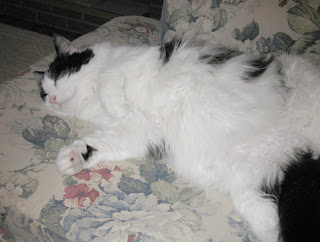 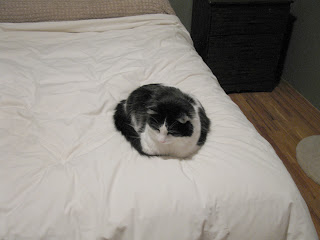 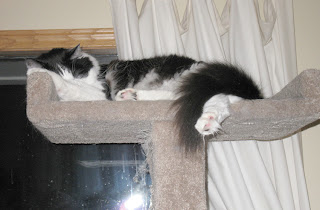 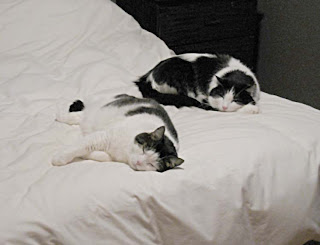 My foster-cat, Tucker, sleeps in the weirdest positions. He will snooze sitting up in the armchair, with one or both of his forelegs on the cushioned arm, as if he fell asleep watching television. He will lean his head against the edge of a side-table. He will fall asleep on a cat-tree, with his face pushed against the lip of the platform. He likes to rest, if not sleep, on the arm of the couch while I sit next to him, his increasingly barrel-like girth along its length, his relatively short legs astride. His favourite location for slumber are on the cat-trees, especially the lower one in the sitting room. But of all the cats who live with me, he sleeps the least. He will rest, relax, lie down, but he follows me about more than he sleeps. At night, still unloved by the other cats, he chooses the other corner at the foot of the bed. I always try to encourage him to lie somewhere on the bed, and he's chosen that as his spot, and I pet him, to make sure he knows he is welcome. 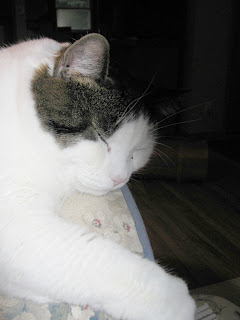 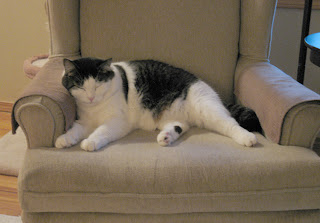 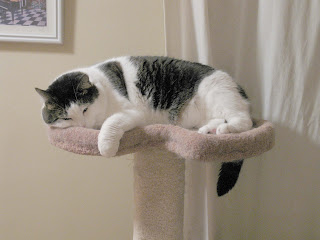 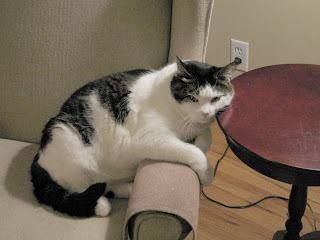 The cats know when it’s bed-time. They can see me preparing, and first Renn, then Tucker, come to the bedroom. I collect Tungsten from where she’s sleeping, usually by then on a cushion on a dining room chair. I’d let her be, but I have trouble sleeping unless she’s on the bed. She complains, then looks out the window, gets something to eat, and comes to bed. Josie may or may not join us later. When I wake, the cats do, ready for another day - of sleeping.