Most cats have whiskers. I think the hairless breeds may be without them, or have fewer. But my cats have the regulation number, about two dozen on either side of the mouth and nose, with some on the cheeks, above the eyes and even one or two on the wrists.
It’s funny that dogs, as a species, can come in so many shapes and sizes that some of them look like members of different genera. Looking at a Great Dane and a Yorkshire Terrier, one wouldn’t believe, on visual evidence alone, that they are the same sort of animal. I suppose it’s because dogs have been bred for varying, practical purposes through the centuries. Cats, who refuse to work, have been bred for looks and companionship. They all turn out roughly the same, except a few types. Or do they?
Each cat is visually recognizable as distinct from another. One must look closely sometimes. So it is with each cat’s whiskers. They are as individual as the cat itself. The length, the number, the placement, the texture; all seem quite similar. But they are not.
Tungsten’s, for instance, are small and fine, as befits the small and fine cat to whom they belong. Short and curved, even curly, they sometimes appear translucent, and disappear into the vibrant colour of her fur. But they are sensitive, nonetheless, and can, for all their thinness, be felt. I know this, as there are few things as ticklish as Tungsten’s whiskers when she’s smelling my face preparatory to lying down for the night on the bed. 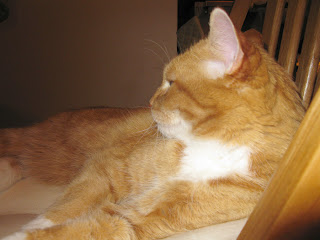 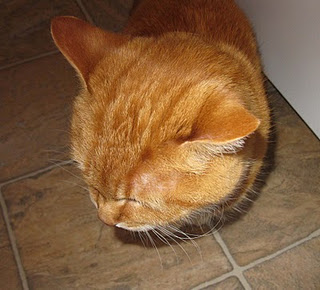 Josie’s whiskers are straight and strong-looking. They resemble the slenderest of metal rods when seen from most angles, though there are curves to some of them, especially near their ends. The whiskers that grow from above her eyes are almost negligible compared to those on either side of her face, and seem to disappear, or grow insignificant at times. 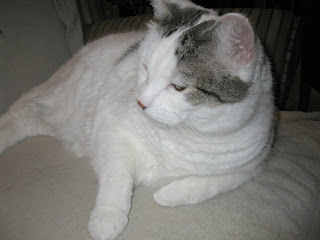 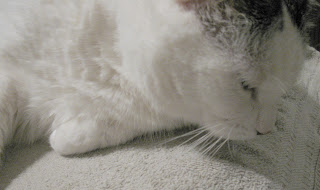 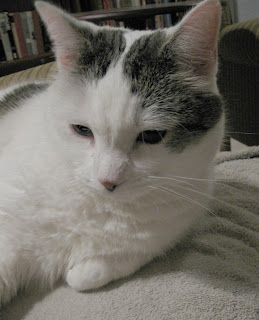 Tucker has a wonderful set of whiskers, Fu Manchu-style, for the most part. Yet it is in my roly poly one that the whiskers above the eyes show most prominently. Two in particular sprout straight up and resemble antennae, a la Ray Walston, from “My Favourite Martian”. Perhaps this sausage of a cat is reporting home on all he sees… 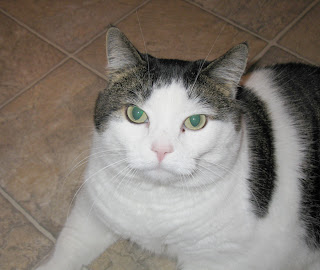 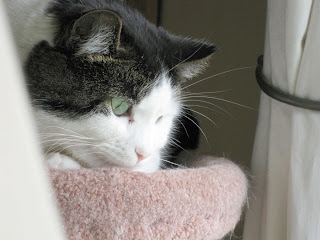 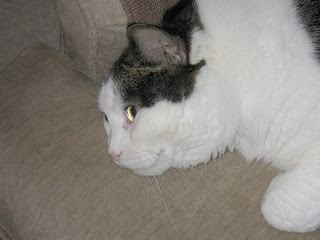 I’ve saved the most glorious for last. Renn has a great explosion of whiskers, in every direction, curving and straight, long and strong. They are pointed like steel rapiers, graceful like the blades of sabres. Cats use their whiskers for sensing their way, for coordination; with such appendages, I’m surprised that my big boy can’t fly. When the wind blows especially strong through the town, I borrow a whisker from Renn to tie down the roof of the house, so it won’t be torn off. If the others are jealous of his whiskers, they don’t show it. But then, Renn is a modest fellow. 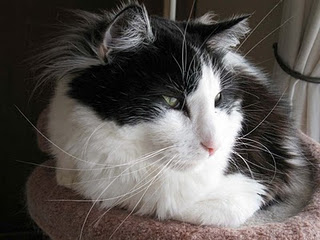 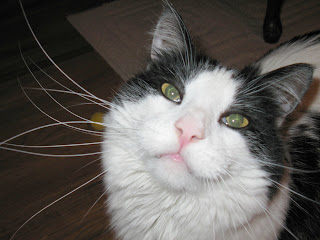 Whiskers are usually thought of as insubstantial, as characterized in phrases such as ‘missed it by a whisker’. The reference obviously couldn’t be to a cat’s whisker, since no matter what the size or strength, it is something important and significant to its wearer.
Posted by John Bellen at 10:30 AM