It seems that Sunday mornings are different at my house than other mornings that I may have off. Perhaps it’s the feeling of leisure-time, of easy-going hours. I usually have chores to do even on my days off, so Sundays are never free of some sort of toil, but they seem different nonetheless.

The cats feel it, too, I think. I believe that they can distinguish between the days of the week - well, at least the days of the week on the one hand, and the days of the weekend on the other. Perhaps they watch for clues. Renn knows that when I go downstairs to get the popcorn-maker on a Saturday evening, it’s movie-night, and he hurries into the back parlour to get a good seat. (No, he doesn’t watch the film; he lies next to me and purrs.) And Tungsten and the others don’t get up before I do on weekend mornings. Monday through Friday, I wake to find only Tucker on the bed; Renn is at the window, Josie is out in the sitting room and Tungsten is in the bathroom awaiting a running tap, for some water. Weekends, all four stay snoozing on the bed until I rise. 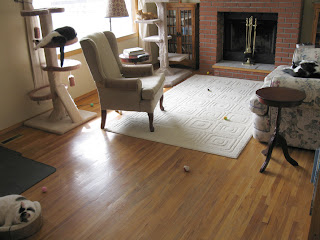 So it is with Sundays. I wake, get the cats some fresh water, make my breakfast. Tucker occupies his time with rubbing up against my leg forty thousand times, Renn with looking out the bedroom window and the girls with relaxing in the sitting room. After breakfast, I have some tea. That’s the sign for the cats to find their places for some serious snoozing, in order to recover from a full night’s sleep. In the picture above, Tungsten, drifting off on a platform of the cat-tree after gazing at the new day a while, has just woken. 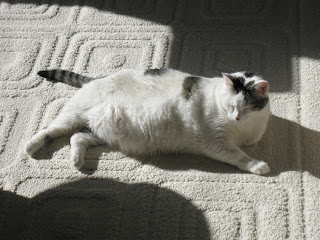 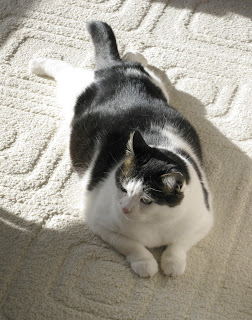 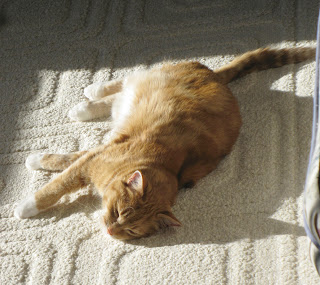 Later, the cats will often be found in the sun while it still shines of a morning through the big window of the sitting room. Josie is much more of a sun-cat than she used to be. Renn likes the rays, too, but not as much as the others. Besides, slumbering in the light may take him away from the bedroom window, where there are birds and people to hear and see, and scents to sniff through the screen. All the cats like that window, though Tucker frequently lies on the sill of a window in the back parlour. My roly poly one still can’t make friends with the others, though they could probably stand sitting next to him by now. He, timid fellow that he usually is, is wary and, except when making trouble, keeps a bit of a distance.

But everyone enjoys a Sunday morning. The beasts are relaxed and purr easily. I like it when my cats purr. I like Sunday mornings. 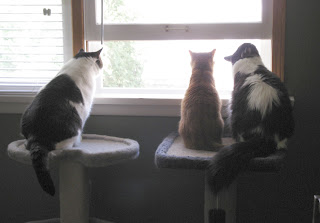