The Trouble with Tucker

I don’t know whether Tucker is stubborn or just a little dense. I know that sounds harsh, and it doesn’t affect how I feel about the softball-headed, no-necked little sausage. But I don’t think he is the brightest comet to light up the feline firmament. 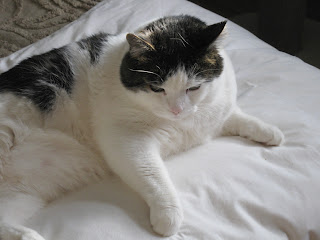 A week or so ago, I came home from work to find the house a mess. There was black and white fur everywhere. It looked like an Ewok had exploded. Instead, I realised that it had been Renn’s temper. He will pick on Tucker from time to time, which I discourage whenever I see it. Tucker will, however, provoke him now and then; he will provoke the other cats, too. One early morning, about five o’lock, I woke to hear Tungsten in the sitting room, growling and hissing. I knew who was to blame, and yelled at Tucker to stop staring at Tungsten. About fifteen minutes later, I heard Josie growling and hissing. I yelled at Tucker to stop staring at Josie. This is how he ends up with scratches on his nose.

This time, I returned home and saw the aftermath of a battle. The nylon tunnel was thrown across the room; a cat-bed was knocked to one side; there was, as I mentioned, fur everywhere. There were even a couple of poops where the fur had flown the heaviest: one upstairs and one downstairs. I knew what had happened. 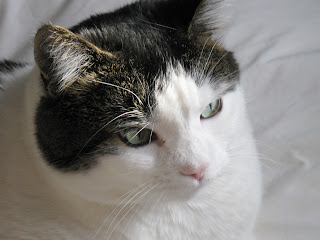 When Renn bullies Tucker, the roly poly one immediately submits. Sometimes, however, he will swat at my big boy when the latter turns away. He will also swat at Renn just in passing. This time, Renn, not blameless in these things himself, was provoked once too often, and the two boys had a fight of the sort that cartoons depict as a swirling hurricane with fists and stars flying out of it. At one point - two points, actually, Tucker was so scared he did what he shouldn’t do outside the litter-box. There were no serious injuries; I don’t think the claws were out all the way. Tucker had a scratch on his forehead that took out a tiny bit of his hair.

For most of the evening, Renn wouldn’t let Tucker anywhere near him, growling low and threateningly whenever the roly poly one came near. He was fine with the other cats and with me. By night-time, things were almost back to normal, and though Tucker was wary around the big boy, Renn had pretty much forgotten the incident. One would have thought a lesson had been learned.

But Tucker is a little dense; just a little. While milling about, waiting for dinner, half an hour after I’d come home, Tucker swatted at Tungsten, who hissed vilely at him. The orange one won’t stand for any of Tucker’s nonsense, any more than will Renn. But just a short time after having his intestinal contents scared out of him, the roly poly one was looking for trouble again. 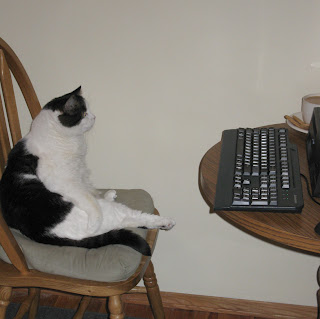 Tucker is a little dense; just a little. But look at the pictures. He’s a cute sausage of a cat, and no matter how difficult it is for him to be taught, he makes me smile. In the photograph above, he seems engrossed by what’s on my computer screen; he’s even ready to appropriate my tea and biscuits.

As troublesome as Tucker is, I hope Renn doesn’t kill him any time soon. I’m not finished being amused by the fellow. 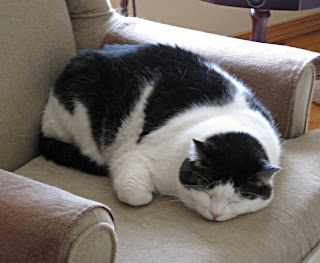