It was time to consider putting away the cat-beds in our household last week. The cats lie on them much less in the warm weather. Higher temperatures, especially at night, are later in coming this year compared to last, however, so the cat-beds, and their heating pads, remained out longer. But the beasts seem to be enjoying the cat-beds regardless of the encroaching heat this spring, and so I decided to leave the beds out for their enjoyment. As well, my plan to buy cat-hammocks to replace them during the summer months has hit the financial pot-hole that has disrupted so many well-intentioned mercantile journeys. So the beds remain.

I did remove the heating pads, though, and washed the beds. I used a brush first to remove as much hair as possible from the material. I ended with enough to construct another cat, and still more came out in the wash. Then I put the beds in the dryer.

The beds are very good examples of their kind. Just the right size for big cats to overflow and little cats to curl up in. The cushions are removable and their padding, a thick, flat mattress of sorts, is also removable in turn. This allows me to wash the bed and cushion covers. I explain this so as to illustrate the outcome of drying these items.

When I examined the beds and cushion-covers after they were dried, I did not find any excess hair. Nor did I find any in the dryer. It was only when I was putting the mattresses back into their covers that I found the missing cat-fur, the fur that had defied removal by brush and washing machine earlier. The hair had resolved itself into dozens of buttons, disc-shaped weavings of cat-hair. They looked like the blood cells that are depicted in animated diagrams of veins and arteries. They also look like Werther’s Originals. In any case, they were not stuck to anything, since the inside of the cushion-covers are smooth and vinyl-like. I simply scooped them out and threw them in a rubbish bag.

I assume that the combined heat and centrifugal force of the dryer accomplished this task. I wish I could find a way of duplicating it with other masses of cat-hair, for its disposal afterward was very easy. I suggested to Tungsten that she could periodically slip into the dryer and go for a spin. I assured her that I would keep the cycle on ‘gentle’. I think she muttered something about claws, and about my having to sleep sometime.

It was just a thought. 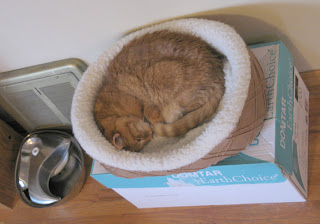