Positive Energy for the Princess

The move to the new apartment has, as I have mentioned, been taken in stride by the cats. But I think it has been actually beneficial for at least one.

Cammie seems to be a little - a little - more tolerant of her roommates than she had been in the house. For the first few days after the move, she didn’t venture far from either the bedroom or the library, though she became ill soon after, and that undoubtedly had an effect. But now, she regularly comes out to the sitting room, even with the other cats present. She will likely never be sociable with them, but she is taking steps toward greater, if grudging, tolerance.

Last night, she was snoozing on the bed with Josie, who is as close to an arch-enemy as the princess has. They weren’t close, but they were on the same bed. There is less hissing when the boys pass her, too, though I still hear it now and then. (Once, on the weekend, Renn had to slip by Cammie in a straitened passage. He knew she disapproved of proximity and didn’t want to get hissed at or whapped, so he passed her at a run. Cammie thought she was under attack and Renn got the hiss and the raised paw he was hoping to avoid.)

An example of her slightly more out-going nature is her playing. She more often than not engages in a little fun at play-time, which is the opposite of how it used to be: previously, it was rarer for her to play than not. She is quite energetic for a ten year old cat. 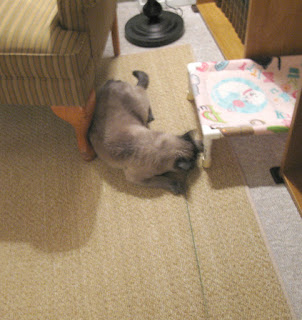 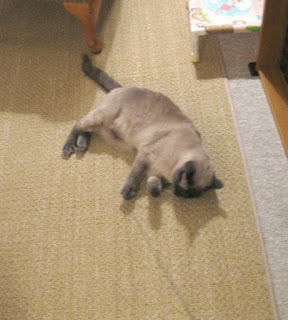 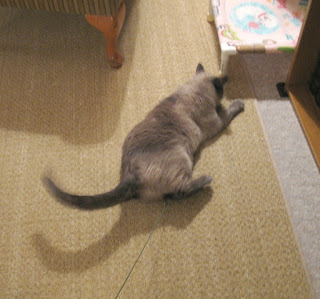 As well, she will periodically zoom about the apartment. She did this in the house, as well, but her long claws (yes, time to get them cut, again) and the carpetting and rugs everywhere allows her to turn and stop suddenly, which I think she likes.

As Kari commented on an earlier article, the move may help Cammie feel like less of a new cat. I’d heard that such changes could have this effect, and I think that the new apartment is doing just that. The princess may always wish she were an only cat, but from now on having siblings may be a little easier to take. 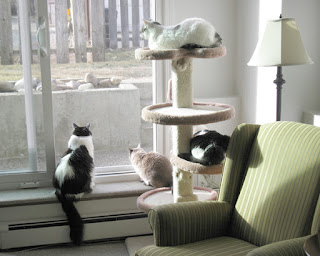