A feline cold has been travelling the apartment over the past month or two. I believe it may have started with Parker, my foster-cat. If so, it didn’t affect him greatly; his nose was blowing bubbles for a number of days, and he was sneezing a little, but not so much that I thought it an illness at the time. He recovered quickly. 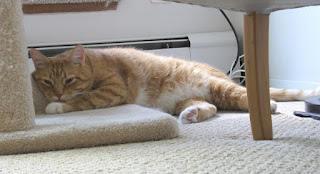 Next hit was Cammie. The princess always suffers when an ailment strikes her. It is usually something to do with digestion, but she also is affected by those sores on her head and by other, more minor, conditions. She gets colds easily, I think, and they last longer in her. There was no mistaking that she had one: her nose was clogged and she sneezed, over and over. She once sneezed nine times in a row, loud and big explosions, for her, but not all that alarming, really. 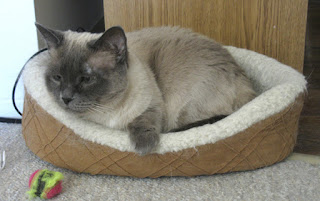 When the cold left Cammie, it jumped to Tucker. The roly poly one can hold a cold as long as can Cammie, but it seems much less obvious in him. His nose acquires most of the characteristics of the illness. It becomes semi-plugged, and gurgles and snorts, in a babyish sort of way, and when he drinks water, it’s like the most uncouth barbarian has sat with a cultured Roman family and is slurping up their wine straight from the jugs. 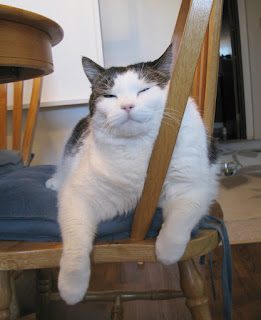 And now Josie has the cold. She has been sneezing frequently and, like Cammie, repeatedly. But her sneezes are light, rather like exaggerated sniffles. I’m reminded of Tungsten’s sneezes, dainty little protests against ill-health, that could barely have been heard. My Chubs’s noises are similarly muted, and her recovery from each series is often louder than its cause. She has the annoying characteristic – just bad timing, really – of always sneezing into the food or water-bowls. 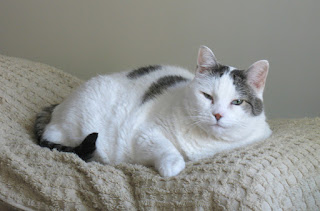 Only Renn has been so far unaffected by a cold. His turn may be coming, but, at the risk of jinxing my big boy, he rarely suffers sickness. When it occurs, he squares his shoulders and continues manfully on, unstopped, and so the symptoms of any condition are barely noticed. 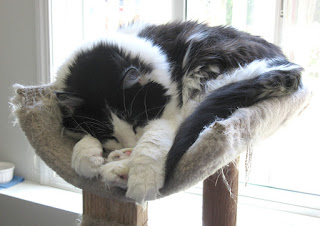 The remarkable feature of my cats’ colds, and one for which I am immensely grateful, is that their appetites have not been diminished by the illnesses. I would have thought that, with stuffed noses, smelling food would be a problem, and without smell, many cats decide not to taste. But eating has continued unabated. This was a particular relief in Cammie’s case, as her cold attacked her immediately after her bout of vomiting, during which she could not and then would not eat.

Another storm to weather, this one is not as serious as some, more bothersome than others. But right now, on this sunny and warm Sunday afternoon, the beasts are napping comfortably, contentedly. I am thankful.
Posted by John Bellen at 2:12 PM