The building in which I live had to have its cable system examined. This meant a technician entering each apartment and checking the wiring. Originally, they were scheduled to come to my apartment last Wednesday. That was postponed until Sunday. Though this was a day off for me, I preferred the visit then, as it meant that strangers would not be in my home while I was absent. (The resident manager, who knows about my cats, and is a cat-man himself, would have seen that none of my cats escaped, but, as every cat-person knows, that’s not the point of one’s concern.)

The technicians arrived at eleven o’clock, which was considerate. I had wondered if they were going to show up at eight or nine. Sunday is the one day of the week in which I can sleep in and make up for the remainder of the week. But I had breakfasted and was ready for the intrusion.

Fortunately, the work required was restricted to the sitting room, at the corner from which the cable enters the apartment. There was no need to go into other rooms; working in the library would have meant moving not only books but bookcases. I was pleased at the limited work needed.

The beasts were not. Though they (except Cammie) are friendly to visitors and are not overly anxious about them after the first few minutes, a large man with jangling and clanking hardware and equipment is another matter. Most of them made for the bedroom - Josie was already there. Parker, who likes to meet every new person, was so welcoming that I had to put him in the library, to keep him out of the way. This did not please him.

The episode lasted only about fifteen minutes, and all soon returned to normal. Parker was disappointed, and the others were relieved. Recovery from their ordeal could begin. A relaxing Sunday lie ahead. 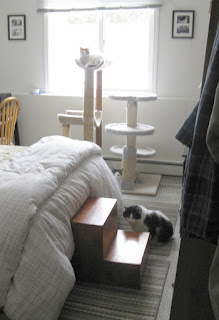