Josie likes to see the water-bowls filled. She will drink from them immediately they are recharged. When I initially noticed this propensity on her part, I was mildly worried that it represented an increased consumption of water. But, in fact, my Chubs does not drink an inordinate amount, from what I can determine. She merely likes freshness.

When she sees me filling a bowl, especially the big one kept in the bedroom by the door, she will come over to its spot and await its descent, often with one of her little scratchy cries. She then helps herself to some of the cold, clean liquid. She almost always drinks from a newly charged bowl, though she rarely consumes much at such a time. She does now and then take a long, satisfying draught, but usually after meals. Other instances are just for the taste.

As are other cat-owners, I am continually concerned with my beasts’ drinking habits; cats never drink enough water. I don’t want to see them take in too much – a possible sign of physical issues – nor do I wish them to imbibe too little, as cats chronically cheat themselves of what they need. So I am pleased to watch the Great White drink whenever she likes. Small quantities add up, and drinking a few swallows just for the enjoyment of it is fine with me. 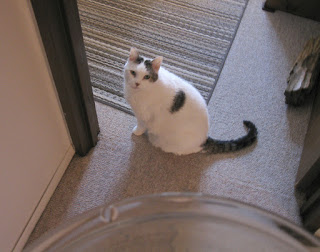