On the second Saturday of every month, the rescue-group of which I am a member, the Lethbridge PAW Society, brings a cat to the downtown store of Homes Alive, a local pet-supply company, to show off to the public for three hours. The purpose is to generate interest not just in the cat himself, but in the group and cat-rescue in general. I am usually the group-member on hand to answer questions. It is a good opportunity to meet people and discuss matters of common interest.

Yesterday, Parker was the cat in the cage. 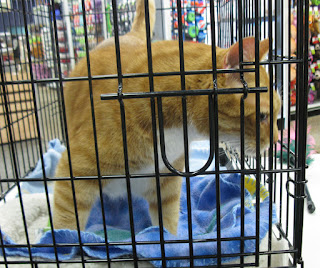 I was confident that the orange boy would do well. Cats have different reactions to being on display. Some are frightened the whole afternoon, overwhelmed by the stimuli. These are spared any further showings. The rare ones have little problem with the situation, and, after thirty or forty minutes of adjustment, settle down. The majority dislike being there but are not so badly affected that they cannot come back. Then there is Parker. 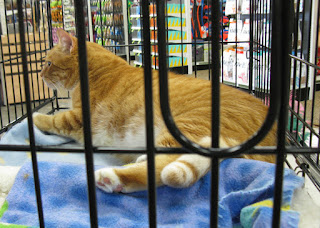 The sturdy-boy did better than any other cat we have had on display. He was a little bewildered by the reason for being in the cage, no doubt, and his breathing at first was more rapid than I would have liked to have seen, but he accepted the situation very swiftly and without much complaint. What problem he did have, I suspect, came from being restricted to the cage, and not simply from being in the new environment. He was a bit unnvered when the noise of shopping carts, barking dogs (pets are allowed in the store if carried or on leashes) and customers became too much, but that happened just the once. Otherwise, Parker took it all in stride. 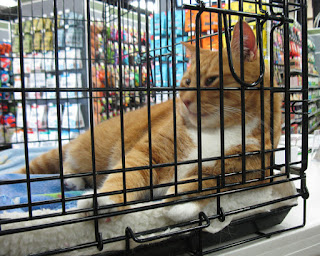 He was a hit with everyone who came to see him. He was very friendly to his admirers - of whom there were many – but I knew he would be. He walked over to their fingers for some face-rubbing and head-stroking, and even rolled over for some. He accepted two chicken treats from one generous couple (even the successful cats on display are rarely at ease enough to eat) and indulged me in play with a feathery wand. The various dogs in the store during his time there interested him, though he hissed at one whose owner permitted him to come too close. (I quickly interposed myself. When people let their dogs come near the cats, they always say the same thing: “Oh, he (the dog) loves cats.” They don’t realise that that does not address the cat’s concern; the latter animal is caged, with no means of retreat, as an unknown and possibly hostile animal advances upon him.) 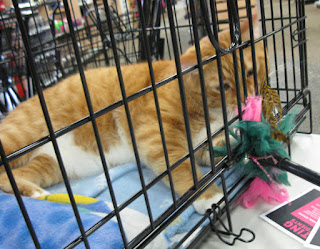 But everyone who saw Parker thought he was wonderful. They all uttered the same two things: “Wow, he’s a big one,” and, “What a handsome fellow he is.” Both true, of course. I talked to people about Parker’s diabetes, and how he is active and healthy, with the condition managed. Numerous comments were made about how fit he looked. No one there wanted to adopt him – except a crowd of young adolescent girls, who swooned over him – but the PAW Society does not adopt straight from such an event, anyway. We don’t want enthusiasm of the moment to be mistaken for a correct decision. But if interest is shown, we encourage it and follow it with conversation afterward. 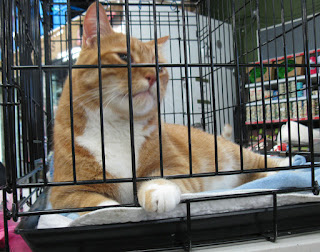 The afternoon was a success. Donations were made – undoubtedly due to the popularity of our orange mascot – and people were met. Best of all, the cat in question was not troubled. He was glad to come home, no doubt, but he may be going again some day. The timing was a bit off: Parker has been my foster cat for sixteen months, but he has just recently been added to the group’s website (http://pawsociety.com/Parker.html). We wanted to control his diabetes first. But now, as you may have read, his glucose numbers are unusual. I don’t think this will cause any great trouble, but it would be better to present him as ready for adoption without reservations. A diabetic cat always, however, comes with concerns over his continuing care. Not to worry, though: Parker will not be going anywhere that won’t love him and care for him as much as possible.

Until then, he will remain in his foster-home – with perhaps a field-trip now and then. 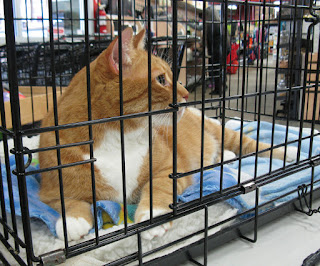