As those who have been reading these articles may be aware, I am always worried about my cats’ eating habits. They are worried about them, too, but only in so far as they feel that they never eat enough. Recently, I took Renn and Josie to the veterinarian, who declared them overweight. I find that hard to believe about Renn, but it’s plain to see in Josie. Tucker, too, is a roly poly sausage who just keeps getting both rollier and pollier. I determined to cut back on the availability of their food. 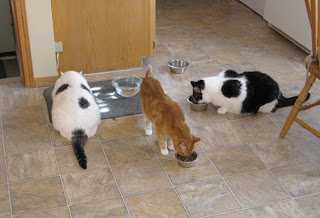 I had previously left the hard-food bowl out at night, and during the day while I was at work. This, I felt, had contributed to the weight gain through excessive snacking. I decided to take away the opportunity for this. I fed the beasts hard-food in the morning when I woke, soft-food at dinner and snack-time (about eight o’clock in the evening) and more hard-food at bed-time. The fact that all the cats expressed hunger thereafter I took as a regrettable but necessary sign of progress. 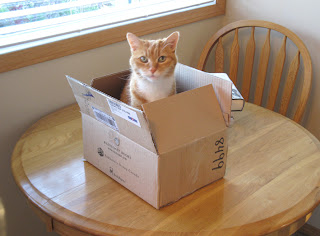 After a month, it was time to weigh everyone. The results showed that each cat had lost weight, though hardly as much as I had hoped. The average seemed to be about twenty grams, which in a cat such as Josie, is an insignificant amount. But I received a shock when I saw Tungsten’s weight. It had dropped to 2.85 kilograms. She usually hovered (and being so light, she hovered almost literally) about 3.2 and 3.3 kilograms. This tiny animal had lost half a pound! 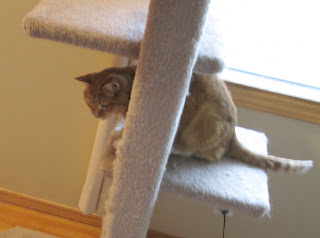 I felt so bad for her. She had been continually sitting on the food-mat, waiting for the next meal, ever since I began the new regimen. I knew of course that she was hungry but I had know idea that I was starving my poor orange one. She was wasting away. It had not been my intention to make her lose weight; she was the only cat who didn’t need to become thinner. I thought that she ate such small amounts that not being able to nibble through the day and night would have no effect on her. I had made a grievous miscalculation. 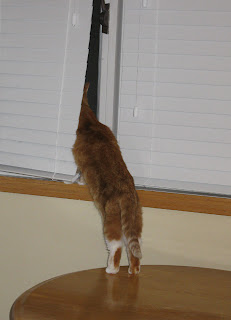 I determined to rectify my error. How to do this yet still deny food to the fatties whenever they wanted it? The solution was simple, really. I now provide food for Tungsten whenever she asks for it. It may sound indulgent, but her loss was the equivalent of a 150 pound man losing twenty pounds. I needed to get her weight back up. She had been too skinny to begin. So now, when I think she wants food, I show her the bowl and take it to a room where no other cats are; I don’t want the others drooling over what they can’t have. Tungsten has quickly picked up on the new routine. She will even wander into the bedroom or back parlour whenever she is peckish, thinking to find food there. When I see her do that, I follow with something nutritious. 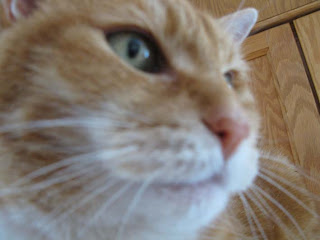 During the day and night, I put a food bowl on top of the refrigerator. Tungsten is the only one who jumps up there. I’m sure the others could, especially Renn; perhaps not Tucker. So far, none has tried, and the orange one remains lithe enough to fly up there whenever she is hungry. I know she has been eating there during the day because of the debris she leaves behind. And at night, I hear her launch herself from the stove up to the top of the neighbouring appliance. 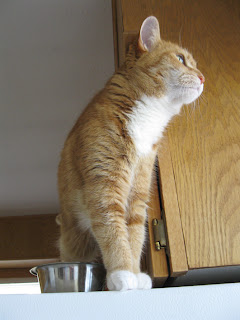 This  tactic has given Tungsten food but denied it to the others. I don’t like treating one cat differently than the others but the latter don’t have Tungsten’s problem. So it must be for a while. I worry that my tiny terror won’t always be able to leap to the top of the refrigerator. When that day comes, I will figure something out; perhaps Josie and Tucker will even be reduced in size by then. In the meantime, Tungsten seems quite fit, even with her loss of weight. The other day, I saw her on the dining table, bunched up as if afraid. But she was merely coiling those deceptively little muscles. She launched herself into the air and hit the floor eight feet away, running even as she landed, off on one of her periodic hurtles through the house, dashing at top speed for no reason I can discern. She seems a little happier now, an undefinable something in her behaviour.

And her weight? This Saturday, she was up to 2.99 kilograms. I was very pleased. And for some reason, all the other cats gained weight, too. Sigh. 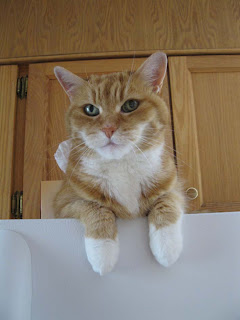