Tucker’s current difficulties with the litter-box reminded me of how and why my roly poly little friend came to live with me. His previous owners had decided to return him to the rescue group from whom they had adopted him because he was wetting outside the litter-box. He was feeling stress over the arrival of a new baby, and it unnerved his aim. He was returned to the rescue group from which he had come and, as an emergency measure, he came to stay with me.

His world was thrown into turmoil. He reacted badly and had to be force-fed for six or seven days, as he would not eat. He wet on a couple of cat-beds but otherwise settled down after a time. I decided that it would be unfair to him to put him through a similar experience when he was adopted by others, so I kept him. Besides, I liked the roly poly little fellow.

This recent problem with his wetting made me think about how easily some people will give up on pets. I don’t claim to be better than others; I can understand the frustration at having a cat suddenly, and seemingly without cause, urinate on valuable carpets or furniture. I can understand the point of view but I cannot sympathise with it. The thought crossed my mind that my life would be much more convenient without Tucker. The thought also crossed my mind that I would be richer if I robbed a bank. It doesn’t mean that either thought received my approval.

Besides, convenience should not be why we live our lives. If we lived solely for convenience, we would have practically no relationships. Marriage would be out. Children would not exist. I am neither married nor a father, but I don’t need to be to realise that having a spouse and/or offspring is highly inconvenient. Even when the situation is at its most enjoyable, it is rarely convenient. But we do not, thank God, live life for how smoothly it runs. We accept certain hardships in return for the advantages that friendship and love, entertainment and joy bring.

As well, there is the commitment I made to Tucker. I never said explicitly that I would always take care of him. It was, however, implied in my acceptance of him moving permanently into my home. To abandon him when things became difficult for me would be easy, but it would hardly be decent behaviour. Society, civilisation itself, depends upon not accepting mere convenience as a basis for relationships. By keeping Tucker, I have saved civilisation!

Well, perhaps not. But I feel civilised by keeping him. He depends upon me to keep him safe and healthy; he depends upon me without even thinking about it. Cats, dogs and other animals kept as pets don’t. They accept things as they are. They don’t think that perhaps tomorrow they won’t have homes. They trust in the people who care for them. They literally cannot conceive of things going wrong.

I could give up the roly poly one, I suppose. But when he ambles across a room just to push his big melon head against my leg, when he looks up at me with his round moon-face, I see that he trusts me without knowing that he does. And to respond positively to that trust is decent, it’s civilised. I’m not really changing the world, or even making it better, by taking care of Tucker. It may be civilised, but that’s not why I do it. I do it because I like him. I do it because he’s my friend. 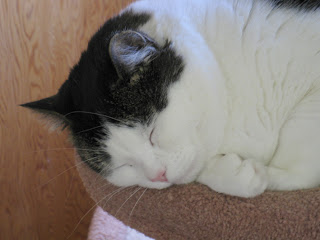