I call Renn my dog. He has certain canine qualities about him. His shape is rather like a sheep-guard dog, the breed that herded the sheep in the movie “Babe”. His colouring is the same; his fur is long and loose; his tail is like a dog’s, though it is, thankfully, usually straight up with contentment. He wags his whole body when he’s excited, rather like a dog whose happiness is too much for just his tail. Renn is my dog. 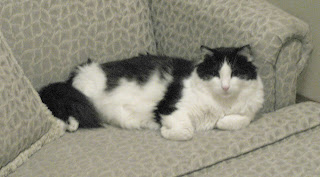 Renn is my lazy dog. He is the only one who rarely rises to greet me when I come through the door at the end of the day. He can usually be found in a cat-bed, a cat-bed too small for him, watching me enter the house, but not bothering to stir himself to say ‘hello’. He will continue to lie there sometimes even until I put down the food bowls for dinner. Then I must rouse him from his prone position - an action which he takes with ill grace - and prod him into the bedroom, where he is served his meal. He can’t eat it with the others because he is so easily distracted - like a dog. 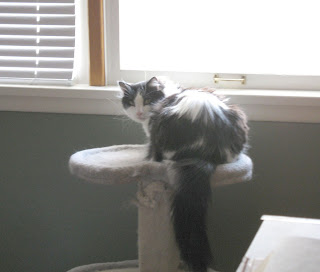 This applies to his soft-food meals only. His hard-food, he likes to have served at the table. (For those of you wondering, yes, I do wash it before I eat there myself.) The food is the same, the bowl is the same, as if I placed it on the floor. But he will sit peering up at the table. Sometimes, he will jump up there in anticipation. Other times, I will place the bowl on the table and, if I want him to enjoy its contents before he loses interest, will have to hoist my big boy up myself. Then he will eat. 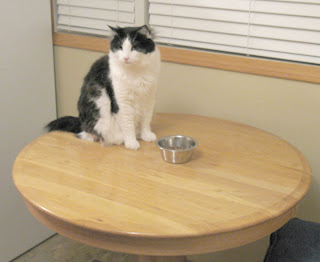 At night, he is now the first to come to bed, climbing up (using the new cat-steps) and lying down even before I get into bed. He doesn’t usually move from an established position during the night, and will like to stay on the bed in the morning, complaining when I am forced to lift him from the covers so I can make the bed before leaving. 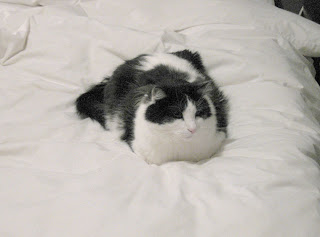 Lest you get the wrong idea about him, Renn can move, and quickly. He has begun to join Tucker and Josie in the games of chase that they play when I come home in the late afternoon. I don’t know if his self-inclusion is welcome to the other two or not. He can be quite active when playing with a string-toy and will now and then amuse himself with a ball or fuzzy mouse. He will watch with interest, rather than participate, in the revolving wand game, though. 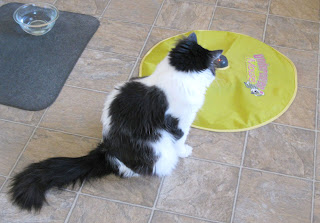 But being lazy is part of Renn’s character. I like it when he snoozes next to me in the parlour as we watch our Saturday night movie. He’s heavily comforting at night when I feel his bulk somewhere on the bed. And I do enjoy seeing him at rest, upside down, on a couch or cat-tree. Laziness is inherent in cats, to varying degrees. It is, much of the time, just how they are. It proves, after all, that my dog is a cat. 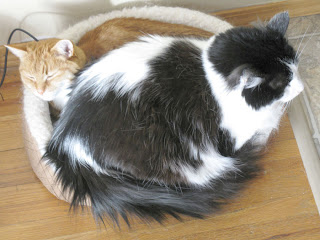