Tucker is my weird one. He’s my little odd-ball.

Some months ago, he had a problem with a urinary blockage. After some tribulations, he had an operation, after which he was fine. His litter-box habits have been very good, he is drinking plenty of water and, though he loathes the special soft-food that the veterinary recommended for him, he eats plenty of Wellness brand, which gives him moisture as well as nutrition. 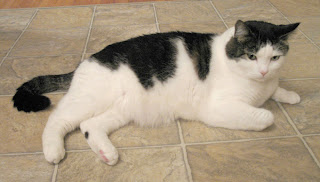 But I’m surprised that he doesn’t get constipated, because he eats the little pieces of fibre that come off the cat-trees and posts. He doesn’t eat the nylon (or whatever indigestible synthetic substance that is used) strings that hold the carpet-like coverings on to the wooden posts and platforms. He eats the tiny bits of carpet themselves. It’s bad enough that he will consume any that he finds on the floor. I try to sweep or vacuum those up when I see them, but I don’t think it’s possible to rid a house of them entirely, not when the house has four cats and six cat-trees. I have no idea how long he has been eating these items but I suspect it’s been long enough to cause a problem if he’s going to have one, and he hasn’t.

I discovered, however, that he actually pulls off bits of a cat-tree to chew. I believe it has happened only with the cat-tree in the downstairs washroom. That is kept there for the possible foster-cat that may come along, and for my cats to scamper over when I have a shower there. There is a patch on the top platform that smells different than the rest of the surface. It doesn’t smell like a cat, but rather like a deodorant. I have no idea how it got there, but Tucker and the others enjoy rubbing their faces on that part of the furniture. Only the roly poly one has gone so far as to eat it. I saw him tug a piece of the fabric out and swallow it before I could stop him. 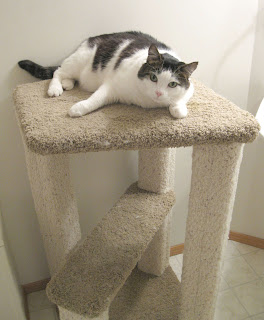 The fact that it is clearly not food does not inhibit Tucker’s enjoyment of the cat-tree, eating it bit by bit. I suspect it will do him no harm, but I will certainly try to discourage it. I don’t think he has been doing this for long, or that he has done it much, but it is another of the idiosyncracies that this little melon-headed feline has. Perhaps he has heard that fibre is good for the body...