At Last, Some Good News For Tucker


Hurrah! Tucker has been accepted at Oxford, and this September leaves for four years of intense study in England.

Well, no, that would be silly. He hasn’t even finished high school yet. 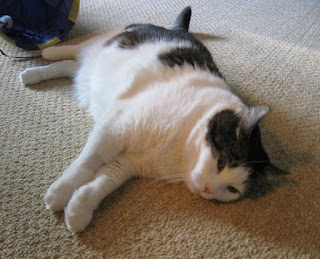 However, the roly poly does have some good news. It doesn’t have to do with his Horner’s Syndrome, which is still afflicting him. I spoke with his regular doctor and she saw no reason to bring him to the hospital right now; since Tucker is suffering no other problems, there is little to be done with his current condition. As some from the Cat Blogosphere have told me, it could take a while before the situation improves. The veterinarian said the same thing. So my cat will continue to look like a little sausage-shaped Bond villain for a while.

A week ago, I conducted another curve on Tucker, who has diabetes. The first number in the curve was quite low, and by late morning, his numbers were very low. I was ready with the corn syrup, but he was not otherwise affected, so there was no crisis. But it occurred to me that I was now giving him too much insulin in the mornings.

Some time ago, the amount was increased to four units in the morning (and kept at three in the evening). This was because Tucker’s numbers were not satisfactorily low. Now, they were too low. I decided to reduce his dosage to three units in the morning, and followed his curve with individual tests over the next five days.

These showed a lower average number than had been the case previously. This average, though not quite as low as the doctor would have liked, was nonetheless a good one and suggested that the management of Tucker’s diabetes may be starting. The veterinarian agreed that the roly poly’s dosage should be fixed now at three units in the morning and three at night.

This is a small change. It may take a long time for the condition to be crushed – it may never be entirely beaten – but at least we are moving in the right direction.

This is better than going to England, though Tucker will miss out on the chance to play Blofeld’s cat in the next 007 film. 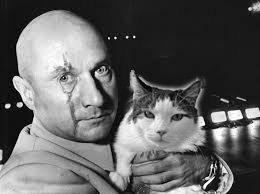