It seems, sometimes, that not a day goes by without something happening here. And, usually, what is happening is happening to Tucker.

The poor roly poly has had more than his share of health problems, and here is another. Tuesday afternoon, I noticed that Tucker’s right eye was looking wrong. Upon closer examination, I found that its third eyelid covered about a third of the eye. You can probably see it better if you click on the photographs below to enlarge them. 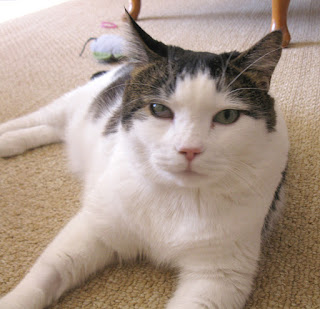 I consulted with others in the rescue-group to which I belong. They are very knowledgeable in feline matters, and I was told that what I was looking at was called Horner’s Syndrome. From what I have learned, it is a symptom, rather than a condition in itself. Frustratingly, there are a number of possible causes, some of which are serious, others of which, though hardly trivial, are less frightening.

So far, Tucker’s eye problem has not ameliorated itself. Today, I called one of the veterinarians at our hospital, and spoke with her about Tucker. She was not alarmed and advised that I wait out the weekend; possibly, I should wait a full week since the onset of Horner’s, before I bring Tucker in for an examination.

After eliminating some potential causes, I feel that the only other aspect of Tucker’s health right now that may have a bearing upon his latest trouble is that he seems to have a very mild respiratory issue. It is not as bad as the cold he suffered a while ago, but I have noticed that his right nostril (note that it is the same side as his affected eye) is crusty, probably with dried mucous. As well, the roly poly one, while grooming and eating, is making disgusting, slobbery noises similar to those he created when he had a cold.

It is a matter of waiting right now. I will see how the weekend goes. Tucker is not suffering in any other way that I can see. He is eating well, ready to play with me, and is his normal cheerful self. I realise that cats hide their ailments well, but I see no sign that he is in urgent need of medical care. I am nonetheless glad that I have a remaining week to my holidays, and can observe him through most of each day to come. 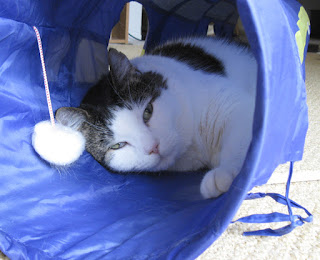 Tucker is the next of my beasts to be featured in the upcoming PAW Society calendar (they being photographed in the order in which I adopted them), so I hope he is recovered before his photo session. This reminds me of school picture day. How many of us had some unsightly blemish that arrived just in time to be recorded permanently, to our mortification? That little kid with the acne, or cold sore, or bad haircut? That’s Tucker.
Posted by John Bellen at 7:53 PM