The Turn of Events


Things have not remained static here during the last couple of days. The last I wrote of Cammie was that the Clavamox prescribed for her intestinal infection was making her vomit. The next day, I spoke with the veterinarian, who recommended that a newer anti-biotic called Veraflox supplant the Clavamox. (There must be a specific department in pharmaceutical companies staffed by people who do nothing but make up drug names that sound like aliens from Star Trek.) The doctor also gave me the option of having Cammie injected with Cerenia, an anti-emetic, to keep her from vomiting. (That one is more like a planet the “Enterprise” visits than a person.) 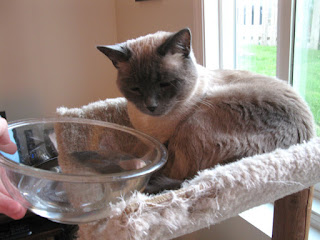 Yesterday, Cammie seemed to be improving. She did not throw up most of the day and, though her intake was very slight, she ate a tiny amount of soft-food and drank a modicum of water – as long as I hand-delivered it. She didn’t stir from her cat-tree. I filled the role of cup-bearer to Her Serene Highness. Later, I collected the Veraflox without bringing Cammie to the hospital. But that night, she threw up. And very early the next morning. And not long after that.

To the hospital she and I returned. She received her shot of Cerenia. While there, the doctor told me that in some cases, Clavamox’s effects last up to 72 hours after a final dose; indeed, though Cammie had deposited a well-formed golfball-sized lump of urine in a litter-box, she also left some very formless feces. The doctor suggested some FortiFlora pro-biotic to counteract the latter. I knew my cat would not consume that in or on her food under regular conditions, but I would be feeding her by syringe, and it could be included in the mixture. As well, the doctor wanted to see if Cammie could supply a better sample of urine than was obtained during the previous appointment. This was a good idea and done for free. The princess and I went home, where I incurred her wrath an hour later by force-feeding her some Recovery convalescent food by syringe.

The veterinarian called with the urinalysis results in the late afternoon. In a twist to the plot, almost nothing adverse was shown in the tests. Cammie appeared healthy. The infection seemed to have vanished. The doctor was surprised, and expressed doubt that the Clavamox could have solved the problem so quickly. However, as the need no longer was apparent, she thought application of the new Veraflox could be postponed.

Had there been an infection? I think there must have, considering Cammie’s symptoms. Was the Clavamox responsible for her vomiting? Again, I fear that to be the case; though the princess is no stranger to the retrograde movement of food, the coincidence of anti-biotic and nearly immediate upchucking was too great to ignore.

Where do we stand now? On slightly higher ground, I’m guardedly pleased to write. Cammie has endured two helpings of syringe-delivered food: good, nutritious food, mixed with water. She has not thrown up since early this morning. She spent most of the day hiding and acting quite depressed (after all, she had been carted off to hospital twice in three days, stabbed with three needles (two samples of urine taken and a shot of medicine), had unwelcome food shoved down her throat twice. All that’s needed is for me to try to cut her claws. But she is out of seclusion and lying on her favourite cat-tree.

And, as important as not vomiting, she has drunk water on her own and even eaten a tiny amount of soft-food this evening. I will try some more of both before bedtime. Some wishes for continued movement in this direction would be appreciated. The events having turned, I don’t want them turning back again. 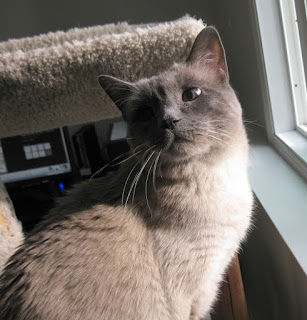