How to Jinx a Cat


Two of my cats have been having physical issues lately that, though they may count as medical problems, don’t seem symptomatic of anything severe. Both issues are of unknown causes.

Cammie has had what I have concluded is an allergic reaction to some foods. This manifests itself in reddish blotches on the sides of her head; they periodically break open with small amounts of pus and blood. They are very minor and give her no problem, so far as I can tell; they are not itchy in the least, and she is not bothered even when I touch them. As I have written in the past, I think they come from shrimp in her diet – an ingredient I have eradicated – but may also be caused by other elements of fish. 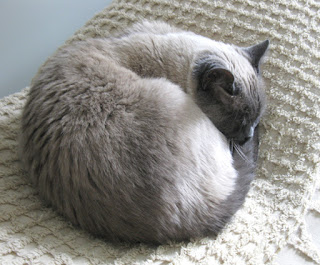 Recently, however, these spots have become rarer, and when they occur, they are not as severe, even compared to the rather mild look of most instances. This has been the case, interestingly, since her bout with a urinary infection. Those who follow the princess’s exploits may recall that she was given the anti-biotic Clavamox for the infection. It appeared to clear it up – much more swiftly than the veterinarian expected – though it gave her a secondary problem of vomiting. That too was overcome. But I wonder if the Clavamox, doing its duty as an anti-biotic, affected the alleged allergy that brought the sores to her head. If this is the case, will the effect last? 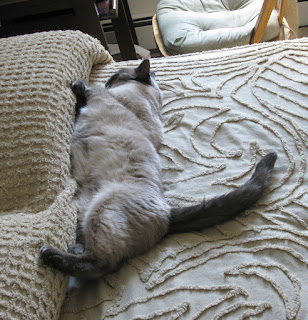 Then there is Tucker. He has had Horner’s Syndrome, an idiopathic condition (veterinarian for ‘I dunno’) which cast the third eyelid across much of his right eye, and caused the pupil to constrict. (The pupil still reacted to light and darkness, but was always smaller than the left.) Other bloggers have mentioned that their cats have had this condition and some have stated its duration to be many weeks, while not having been a major problem for their cats. A friend here told me that a couple of her cats suffered Horner’s, as well, but only after surgery in which anaesthetic was given. Tucker too had surgery a while ago, and received anaesthetic, but his bout of Horner’s came some weeks afterward. 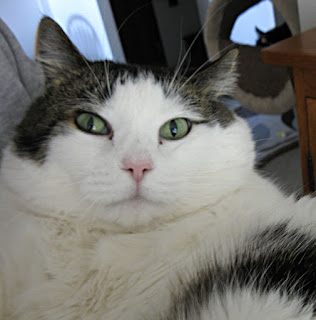 In any case, it was noticed on Tuesday that his right eye appeared less covered by the third eyelid. Sure enough, that tissue is much less prominent now, and almost back to the corner to which it should stay. Also, his right pupil is almost back to a size matching the left. I think his recovery from Horner’s Syndrome is advanced. What is causing it is as much a mystery as what initially instigated it. 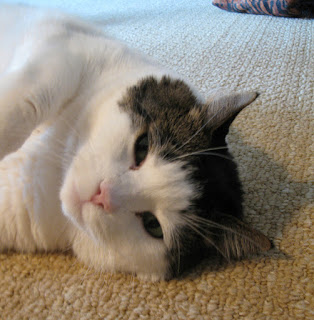 Having described the improvements two of my beasts are enjoying, I fully expect a relapse for them, and some sort of minor disaster to overtake the other two, in accordance with the laws of jinx. (No, I don’t mean Mr Jinx over at ManxMnews). However, I thought I would take the risk to share the news of better health, something that is good to read about and even better to write about.
Posted by John Bellen at 12:21 PM