Friday was our national holiday and, as is usual on Canada Day, fireworks were set off by the city authorities. This results in a good time for most people – but animals have a different opinion on the activity.

In the old house, I could see the fireworks explode from my front window. I lived only a short distance from Henderson Park, where they are let off. Naturally, this scared the cats. I was interested in how they would react this year, as our apartment is much farther from the site.

A factor in this year’s response, however, would be the acoustics in the new home. For some reason, some sounds are perceived as quite near, when they are in fact far away. When celebrations are taking place and music is performed in Galt Gardens, the town’s central park (almost ten blocks away), I hear the music as though it were being played just across the alley. But if I left my building and stood in the parking lot, not fifteen feet away, I can hear little. So what the fireworks would bring this July 1st, I couldn’t predict.

As it turned out, the cats were not terrified. They seemed to be able to differentiate fireworks from thunder, which they dislike. Cammie will hide under the bed at the first hint of a storm. But even as the fireworks were exploding, she came into the bedroom, somewhat nervous, but not taking refuge in a secret spot. The boys were nervous, as well, but maintained a mancatly reputation.

Who surprised me was Josie. She was in a cat-tree in the bedroom when the sound effects began. They were deep and booming. My Chubs ventured to look out the window but, even were our new home facing the right direction, we would have seen no shower of lights. The noise was more of a curiosity for the Great White than a fear and, before it was over, she had settled herself down for the rest of her interrupted nap.

Josie is now thirteen, pretty much as active as she has always been and in good health. Mentally and emotionally, I guess, she has decided that being scared of fireworks is for kittens. She still doesn’t think them a good time – but they aren’t bad, either. 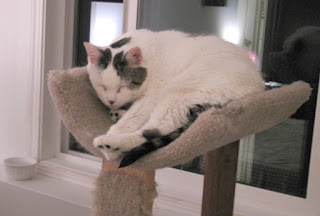