The Cry of the Warriors


We have had intruder cats passing by the windows of the apartment previously. Sometimes, they stop to look at my animals within. Most seem quite unconcerned by the disturbance they cause. This time, I noticed less the cat outside than the reaction to his presence.

Three of my cats gathered at the bedroom window to view this intruder. (Of course, he was not actually an intruder, any more than others in his position have been. They have a perfect right to walk by on the lawn outside. But try telling my beasts that.) Alerted by Renn’s vocal disapproval, Tucker and Josie hopped up to see this audacity for themselves. 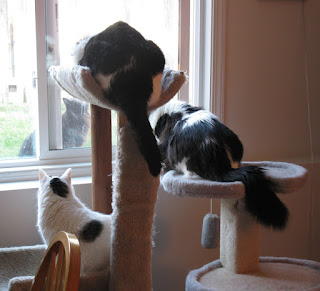 While Josie remained silent, Renn gave definite indication of his outrage. He is a big, muscular animal, and venting his astonished anger on this occasion produced a fittingly menacing sound. Starting at the mid-range, his whine dropped slowly like a descending bomb, growing deeper and more furious. It was a challenge and a warning.

Tucker too took umbrage with this breach of the neutral zone that he seems to think surrounds the apartment’s exterior. He crouched low in the saddle of the cat-tree and glared at the feline beyond the glass. Following my big boy’s lead, he gave forth his own defiance of the stranger. 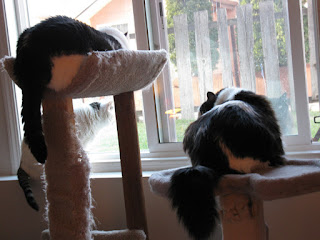 He sounded like ‘this little piggy that went “wee wee wee” all the way home.’ A deflating bladder of bagpipes would convey greater danger to a trespasser. The stranger must have wondered why I was keeping a beached seal on a cat-tree.

I would never let my pets out of the apartment, of course, unless it were on a leash of some sort, and probably not even then. But I quake to think of what would happen if they escaped. Josie might exist for a long time on body-fat. Cammie is fast and wary, and her distrust might keep her alive. Renn, as shy as he is, might intimidate by his size. Tucker might survive by being elected a pack’s mascot or jester. That’s really his only chance.

So I will keep him – and the others - safe inside. But I know that blood-curdling shriek will turn my dreams into nightmares. 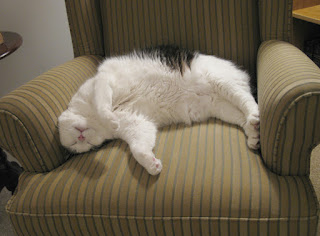