In Praise of Boredom


Having five cats living with me, there is no normalcy. Unrelieved boredom would be nice, but it just doesn’t happen.

Cammie was ill again. The princess had been throwing up for several days before Saturday. When this transpires, it is sometimes of short duration. But this time, it resembled a previous occasion, which ended when I took her to the veterinary hospital and she received an injection to calm her stomach and allow her to eat. For a few days, little food had been staying in Cammie’s stomach, and I thought I would need to take her to the doctor again.

But formerly, I had forgotten that I possessed a small supply of slippery elm. Now, I resorted to this natural remedy, rather than the quicker, and synthetic, chemical. It is messier than an injection, especially as the princess not unnaturally dislikes being force-fed something that looks, feels and probably tastes as if someone had already consumed it.

Saturday, I gave Cammie a dose of the elm. Some hours later, she threw up. But she had evinced an interest in eating. This morning, I heard her wretching in the sitting room, while I was lying in bed; I could find no evidence of vomit, however. She sometimes will sound as if she is throwing up, but contain the upchuckery. This suggested that whatever had come up had not been in great volume. She received another unwelcome dose of slippery elm.

Her appetite improved today. She is hungry again. She did not join in at play-time this evening, but activity is only one of her barometers. I am concerned much more with nutrition. In that regard, she is feeling much better. I may give her a final dose of elm tomorrow, just for good measure.

What causes these periodic illnesses? I cannot guess. She is eating more Merrick ‘chicken’ these days than Fancy Feast, but the first example of this sickness followed upon a stricter Fancy Feast diet. And if the food causes the problem, it should be happening more often. I don’t think what she is eating is her trouble. There is too little information to make a firm determination. I am pleased that the problem seems to have been solved with what I had on hand here. While the princess rested in her favourite heated bed, her stomach was calmed, and her body healed.

For my cats’ sake, I long for stability, even stagnation. There is something to be said for the repetition of unlimited naps, long views out a window, play-time and regular meals. Unrelieved boredom would indeed be nice, but it just doesn’t happen. Let’s see what tomorrow will bring. 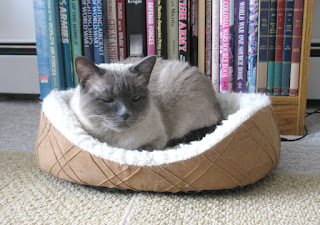