There are several reasons why Saturday and Sunday mornings are my favourite of the week. Aside from not having to go to work, there is the corollary of being able to return to sleep – once I give my diabetes boys their shots. Then, I am able to wake again a couple of hours later with cats all over the bed.

Within the last couple of months, the number of beasts to whom I have woken has increased to four. Cammie had started to jump onto the bed early in the mornings months before this, but seeing one, two or three others already present, she would hiss and leap off again. Now, she stays, sometimes for twenty minutes. Then she will sniff Josie’s tail or something similar and flee, again with a hiss – even though the tail had been in the same spot ten minutes before; the princess just hadn’t sniffed it.

But the mere presence of three of her feline roommates no longer causes Cammie to abandon the bed. She will lie on my chest and purr while I pet her. It means I lose that much sleep, but I don’t mind; sleeping in is for people without cats.

(Please note the photographs below were taken while I was on my back, unable to view what I was recording; I had to hold the camera – brought to the nightstand the evening before in anticipation of this event – above my head. You can see only parts of some cats, but all of each was there…) 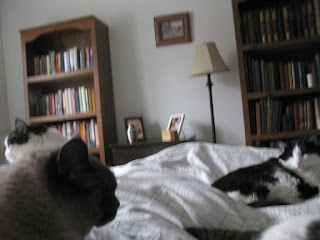 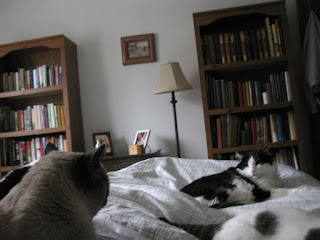