Cammie’s dental procedure went very well. She required no teeth extracted. Early on, the veterinarian called me because she was concerned that some inflammation of the gums may have been indicating bad roots in a couple of molars, and wanted to know if I would authorise the expense of a couple of x-rays. I thought it would be foolish to deny it, so the pictures were taken, and showed that the roots were in fine condition. So my princess’s mouth required nothing but a good cleaning. 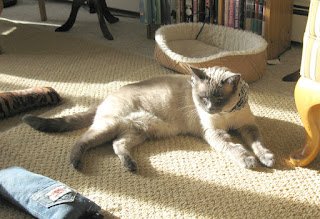 When she returned home, Cammie appeared unaffected by the anaesthetic. Though I was told that she may be a little groggy, she trotted about the apartment and climbed cat-trees as if she had never been sedated. I was also warned not to feed her too much at first. Cammie doesn’t eat a great deal even when she is hungry, but last evening, she ate quite well - the result of nineteen hours without sustenance. I spread her dinner over several portions, but I thought this a good chance to put some soft-food into her, and she was willing. The only noticeable effect of her ordeal was that she was a little troubled eating hard-food. While I was advised that there was no reason Cammie could not, my princess was undoubtedly suffering a bit of soreness in the mouth, so the hard kernels were initially less desirable than the soft-food. But at bed-time, she was eating as usual. 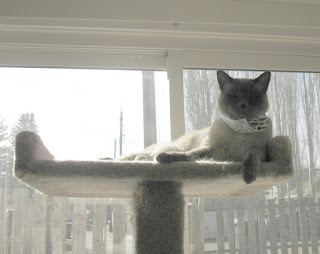 Yesterday was good for Cammie. It not only gave her teeth a cleaning that was needed, it demonstrated that they are in very good condition, and won’t likely need a great deal of work as she ages, and is less able to handle anaesthetic and surgery. I will of course have her looked at in the future, but for now, she has passed her examination with flying colours - one of which was tied about her neck as a bandana by a veterinary technician.

(And thank you to all those who expressed wishes for Cammie's health. Such thoughts were appreciated.) 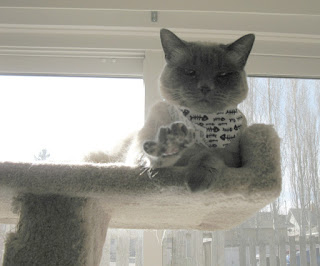