Get Away from My Home!


My foster-cat, Parker, of course thinks of the cosy apartment as his home. That is as it should be. And that being the case, he wants to defend it against any cat he feels might be intruding. This applies to the outsider-cats who come by just for the food I leave for them.

The interesting thing is that Cammie used to behave in much the same way as my sturdy-boy does now. The princess still shows an interest in any cat who may be seen through the windows, but she does not become excited about their presence, unless they approach very close and she can smell them through an open window. Parker, however, will sometimes challenge a strange cat, whapping the window-panes to warn him off. Even if it doesn’t go that far, his tail flicks furiously, like a stick on a drum-skin. Perhaps Cammie, no longer the newest, has little anxiety over being displaced – that is Parker’s worry now.

That is how he behaved when the two black cats came by on the weekend for a daylight meal. They did come quite near – but, as I tried to reassure the orange-boy, they were not intending to enter his home. They were just enjoying a meal at the café.

(You may note my solution to having the outside food-bowl exposed to the elements. It is a nylon shopping bag, stiffened on the bottom and sides to create a kind of box. It is on one side, facing away from snow, sleet and wind, and weighted with a flat stone, on which is the food-bowl. I placed the bowl nearer and nearer the shelter, until, now, it is inside. These two felines, at least, have overcome any fears of it being a trap. I think others may have, or at least will. So far, this solution is working. Though Parker may disagree all together with the point of leaving food for outsider-cats…) 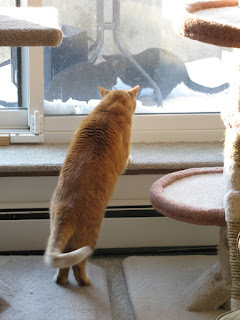 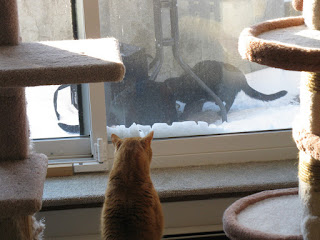 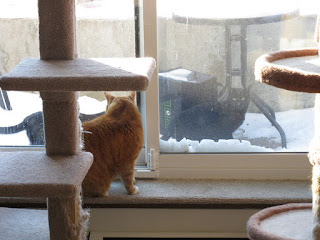 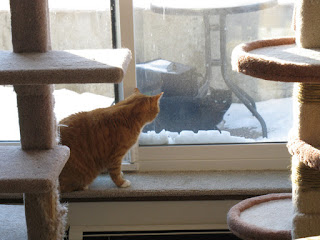