Tucker had his dental surgery today. It will be his last. All of his remaining teeth were removed, leaving none.

When I was told of the results, I was surprised that so many had been taken out. But I had instructed the doctors to remove any teeth that looked bad, or threatened to become so in the future. While Tucker can live and thrive without teeth, operations that require anaesthetic become increasingly dangerous as a cat grows older. Even at thirteen years, the roly poly one is no longer at the optimum age for such a procedure. So, like cutting back brush and under-growth in a wood to prevent the possibility of future fires, I wanted any potential dental problems solved while the circumstances allowed.

My boy is back home. He was very hungry, of course, and, since it had already been five hours since he had come out of the surgical theatre, it was safe to give him small portions of food. He has eaten what I consider a satisfactory amount for the time being. Indeed, he seems finished with eating for the evening, though I will offer more later. I think the pain-killers he had been given at the hospital are wearing off. He will receive more tomorrow morning, and, though I will feed him then, I will be back at lunch-time to offer more food; he will by then again be feeling the effects of anaesthetic. 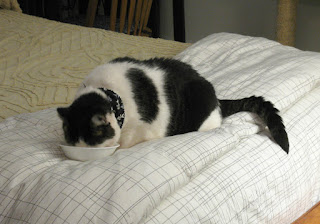 Tucker is trying to figure out what to do with his tongue. It is no longer restrained by his teeth and keeps coming out. He will grow accustomed to the new situation, and come to an agreement with his tongue, but in the meantime, he must be wondering where his teeth went, and why.

I feel bad for him. His white paws are pink, stained with diluted blood. He is in pain and will suffer discomfort for some time. I know it is for the best, in the long run, though the realisation does not make his confusion easier to watch. But the healing has already started, and will soon be complete. Battered and bruised, Tucker has given all and been left with nothing. But sometimes, that’s a good thing. 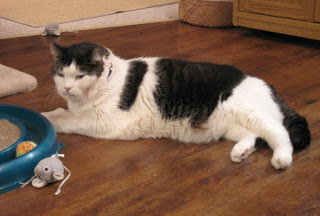