I know a number of readers of this blog were wondering about Parker. If the truth be told, I was thinking on Friday that this might be the orange-boy’s last weekend. I am, however, revising his plans for him.

I watched him carefully over the weekend, and realised that I must be cautious not to ascribe how he is feeling to how he is feeling now. Friday was not a good day for him. Saturday, however, was different. He is a foster-cat from the PAW Society, of which I am a member. He was formerly sponsored by another rescue-group, with whom PAW works very closely. That group’s founder and chief mover, who is still very attached to Parker, came to visit him Saturday morning. Parker, who has been indifferent to visitors at times, even hostile, behaved well, and was at ease.

I had to go out for several hours that afternoon, but when I returned, the sturdy-boy and I went for a walk. Later, he had a very good meal. That evening, he was at an open window, sniffing the vernal scents. Sunday was an even better day. Parker felt strong enough to walk across the street, down to the end of the block, cross the street again and make it about half the way back to the apartment building. His nose was moving constantly, and he listened to birds and watched people. Afterward, back home, he ate half a large tin of Hounds and Gatos pork pâté, followed by half a tin of Fancy Feast chicken-and-liver. He was still sleeping that off hours later.

I am watching my boy in regards to several gauges. I watch his body language, especially his tail’s movements, but also his restfulness / restlessness, his positions and where he chooses to lie. I watch his food- and water-consumption. I watch his interaction with the environment, and how responsive he is. I watch his trips to the litter-boxes.

There was a thought I had of taking Parker to the veterinary early this week, to see how the doctor believed he was faring. But I don’t think that is necessary at this point. It would add stress to my boy when he needs it least, and be a pointless expense. I do intend to telephone the veterinary tomorrow and talk about pain-management. I don’t think Parker requires much of it right now, but he may benefit from receiving some soon.

For the moment, then, Parker stays with his family. Considering his condition, that may change, and it may change abruptly. I hope that if it does, I will know it, and, once I know it, will be able to cope with it. 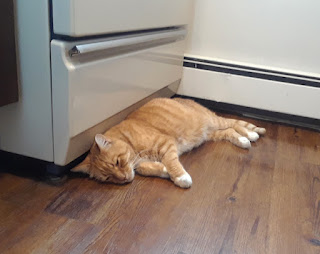