The frustrating nature of diabetes has once again been brought to my attention. Neville came to stay with me on a foster-basis last September, and, though he received insulin for his diabetes, it was a short time before it went into remission. Random tests of his blood-sugar soon revealed numbers between four and eight, the perfect range.

Now, however, he is registering numbers in the teens. A couple of weeks ago, I noticed that Nevsky was a little off his food, and was choosing spots in which to snooze that were out of the way. He was not hiding all the time, and continued to play. But I thought I should take a look at his blood-sugar again, as it may have been a higher number that was influencing his behaviour. Two tests, a couple of days apart, resulted in numbers between 14 and 15. Today, it was 17.1.

I cannot account for the rise in numbers. He is eating a new food, as he seemed to have become bored with his previous soft-food. This variety, however, has, according to my research, the proportion of carbohydrate low enough for a diabetic’s good health. (Any percentage under ten is acceptable.) There was also the fact that we have been suffering from very high winds for a long run of days; I thought that they may have been causing stress, and elevating Nev’s numbers. That hypothesis reflected, admittedly, an outside chance.

I have begun giving Neville a single unit of insulin once a day, in the evening. I started today; tomorrow I will test him again; it won’t be a full ‘curve’ of bi-hourly sampling, but I will poke his ears at six o’clock tomorrow morning, then at mid-day and, finally, just before his insulin – if it is needed – in the evening. I want to see a good curve. Perhaps after a few weeks of this, hopefully less, his system will re-adjust itself to what it was. In the meantime, the poor fellow will have to accustom himself to some daily jabs.

Neville is still a slender mancat, though no longer the Thin Man he once was. That would make injecting him by syringe easier, if his fur, now much longer than it was when I used to give him insulin, did not make finding his skin under it all difficult. In many ways, he can be impatient; in receiving injections, however, he is a good patient, and I am grateful for that.

I would be even more grateful if he need not be a patient at all. 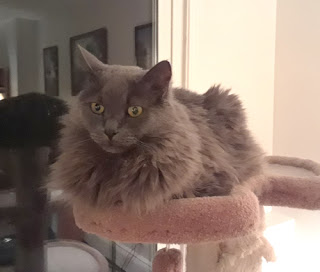