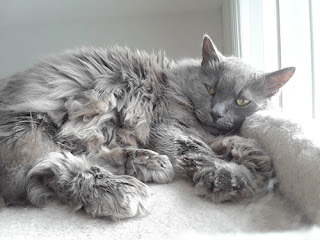 Neville is proving a bit of a puzzle. Not only has his diabetes resurged, but it is deciding not to be greatly affected by the insulin I am giving him. For a week, I gave him one unit a day, increasing to one twice a day. That did not make a great dent in his numbers. I have since put his dosage up to two units twice a day, once in the morning, and once in the evening.

While I was gratified to see his initial reading in the morning (before insulin) had decreased to 15.0, six hours later, after receiving two units of his medicine, it had dropped to only 14.4. This is mysterious to me, as such an amount of insulin should have had a greater influence.

I won’t put up his dosage again, as I don’t favour endlessly increasing an amount in the face of small effects. I believe the insulin (from a different source than his first) is lowering his blood-sugar reading, but the amount is enigmatically small; I still do not believe he is insulin-resistant. My intention is to continue his current dosage (two units twice a day) for a couple of weeks, reading his numbers periodically, to see what a longer-term programme does to them.

I am reluctant to take Neville to the doctor for this, because of the stress he would undoubtedly feel, and the fact that I would in likelihood receive a prescription very similar to what I am doing now: having started with a small dosage of insulin, raising it a little but not greatly, and seeing what happens on that amount. There is a possibility of course that the doctor would find something else wrong with Neville, but I see no other worrisome signs in him. I will watch for any warnings; even if I see none, I may take him to the veterinary if we have no adequate response from his new insulin dosage.

In the meanwhile, Nevsky is not happy, thinking that I am coming to stab his ears every time I approach him. He has not, even though he has been in the Cosy Apartment since September, really reconciled himself to being here, or to me. I think he prefers it to his previous setting, but I don’t believe he is pleased to be here. I hope that this is just a matter of time.
Posted by John Bellen at 2:39 PM