Portia’s surgery went without a problem. She needed only one tooth removed, though she also received a good cleaning.

Since she has come home, she has been somewhat restless, though this has diminished with the evening. She was hungry, so that may have been part of it. I didn’t want to feed her too much, as she might bring it up again; I think that danger is past now, though, and I will give her a bit more to keep her stomach from growling through the night.

Her restiveness may also be due to the high temperatures we are experiencing. The cats are especially lethargic – it’s hard to tell sometimes in comparison with their usual behaviour – and Portia is spending more than a normal amount of time on the cooler linoleum floors of the dining area and kitchen, instead of on the carpets.  Even so, a stretch on the library couch undoubtedly feels good.

I hope it also feels good to be rid of a troublesome tooth, and to have her gums and other teeth cleansed. Once she recovers from the direct effects of her surgery, I think Portia will be a happier cat. 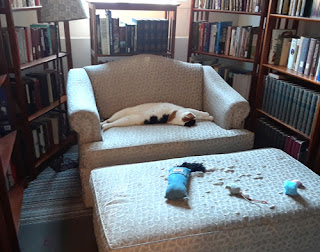