Portia continues to adjust to her new world. Last night was a big test, though, as it turned out, it was rather anti-climactic. I left the library door open through the night, for the new girl to come and go as she liked. It turned out, I suspect, that she did not like, and spent the whole time sleeping in her room. Nor do I think the boys went into the library.

That was, of course, the test: to see if there would be trouble. There hasn’t been during the day, so I imagined there would be even less at night. Portia still hisses at the perma-cats if they draw near; she doesn’t hiss at them in each instance, however. I feel confident in leaving the library door open permanently now. Our guest still spends most of her time there, and probably will for quite a while, until she feels comfortable with the boys. 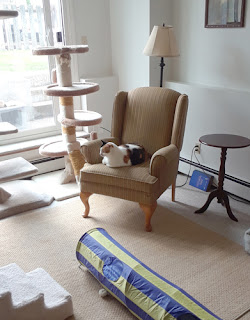 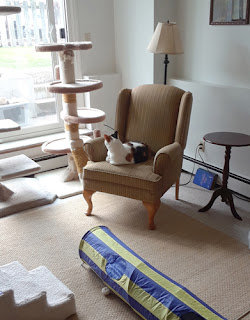 Yesterday, she passed another test, which I had not expected her to take. While looking out the screen door to the concrete ditch, she met Ninja, a little grey cat who lives down the alley, and visits to supplement her diet (which, considering her compact little body and smooth fur, is likely both sufficient and healthy). As you may see from the pictures, the visitor felt safe enough to come near the food bowl. For her part, Portia was nonchalant, and did not even hiss, simply observing Ninja through the screen. 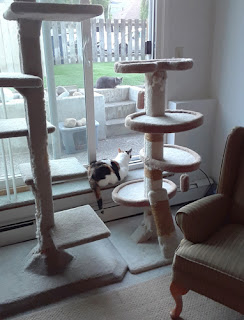 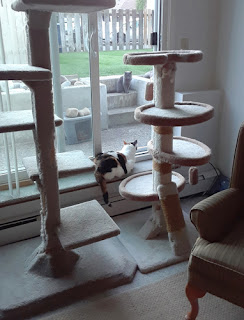 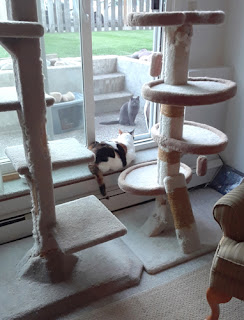 This was important, as I now know that given the average cat, Portia will not claw through a screen to get at a perceived rival. During the warm months, when a screen is all that is between an insider-cat and the wilderness, it’s necessary to know that that it is enough.

As for me and my gal, she enjoys being petted and stroked, but when she tells me she is satisfied, I had better obey – which I do. Stopping when asked is a way of building trust with Portia. If she knows that I won’t take liberties, she will feel more open to giving them. I think the time will come when she will want to lie on my lap – but, since wanting and doing are two different things, it may be longer until she actually lies there. That’s all right; when it comes to change, I have always preferred a relaxing stroll to a strenuous run, anyway. 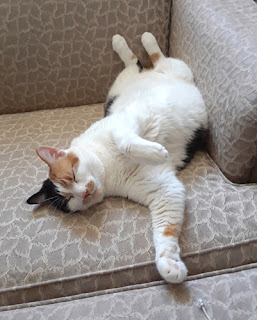