Tucker is an adorable sausage of a cat, but he is, perhaps, not the smartest fried food on the skillet. He likes to play by himself, which is admirable, and was chasing a fuzzy mouse about the sitting room floor yesterday. He knocked it into the nylon tunnel and, as he will from time to time, charged in there after it. He’s not lean and little like Tungsten, so he often drags the tunnel with him when he rushes in at speed.

This evening, he crashed it against a cat-bed and because the tube lost its straightforward shape, was rather perplexed at how to get out of it. Don’t worry, though: I pulled it back, it regained its familiar shape and he escaped, ready for more fun. My roly poly. 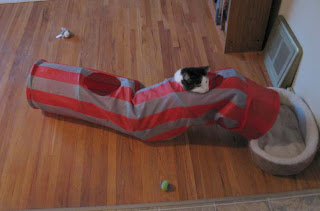