Cats have their favourite food, their favourite toys, their favourite places to sit and lie. It must have been interesting for them when they came with me to the new house a couple of years ago, and discovered everything moved about - and continuing to be moved about for a few weeks. New locations had to be found for resting, for watching the outdoors, for watching the indoors. Old furniture had to be located and tested to make sure it was as good as before. Sometimes it was no longer satisfactory and explorations had to be launched to find better.

But the beasts have long since made their places in the house. Tungsten has four spots in which she may be seen passing the time. One is on a cushion of a dining room chair. It is a good size for her and is thick and comfy. She will usually be found curled up there. 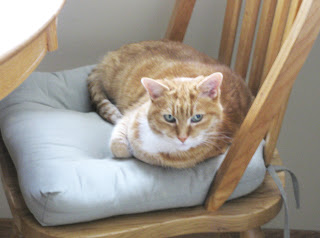 Other times, she will lie on my bed after it is made in the mornings, revelling in the cleft formed where the two pillows meet. It too is a good size for her, and she’s light enough not to sink between the pillows. She also enjoys lying in the near corner of the sitting room couch, where I sit. Sometimes she sits there without me, sometimes with me, in which case, she will lie on my lap. She is my only lap-cat, though Josie and Tucker will stay there for a little while, if I place them there. But they are fat and heavy and I lose the feeling in my legs if they stay too long anyway. So the orange one makes the best lap-cat. She seems to like it. 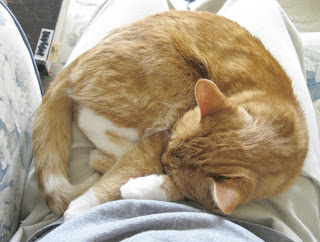 Renn likes the top of the tallest cat-tree in the sitting room, and doesn’t frequent the lower cat-tree much. He likes the highest spot for sleeping. He also enjoys the far corner of the couch in the sitting room. This is a favourite sleeping spot, where he feels quite safe and not worried at all about exposing his unprotected belly. Besides, he may get a gratuitous chest-rub. 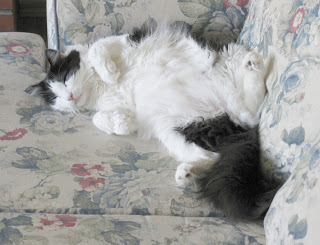 But for watching, nothing beats the cat-trees in the bedroom. Sometimes, he will observe the back lawn from the parlour, at the opposite end of the house. It’s especially entertaining to see my big boy catch sight of something that needs urgent attention, which will cause him to rush between one room and the other, trying to get a better view of it from one window, then the other. But for routine reconnaissance, the bedroom is the better location. He will spend hours there, often leaning on the sill of the open window, never testing the screen - he knows he mustn’t - simply watching the world. Of all the cats, I feel sorry for Renn the most come autumn and winter, when the screens are removed and replaced with the storm windows. 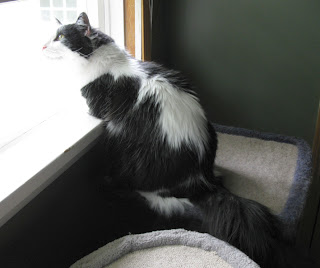 Josie, as I’ve mentioned before, loves the top of the tallest cat-tree. From there, she can survey the world outside the big picture-window in the sitting room, and, being the loner she is, and a bit of a nervous feline, she can make certain no one is sneaking up on her from below. She snoozes there, and she watches from there. It’s her place. She will repose on the lower cat-tree,  though only when the taller is occupied. But I like seeing her make the climb up the steps to the loftiest perch available, knowing that she’ll be comfortable and happy in a few seconds. 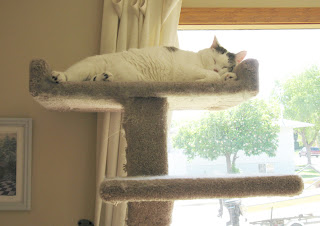 Josie will be found other places, too, such as the cat-trees in the bedroom. There are two there, and she and Renn frequently share them. She likes the new cat-beds I bought late last year, and her favourite was the one nearer the front door. She resorted to it much longer than either Renn or Tungsten did once the weather warmed, but now even she eschews it for cooler spots. 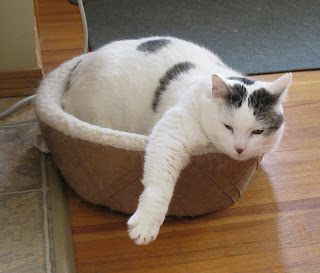 The oddest place I’ve found my Chubs is the mantel of the fireplace. Why she enjoys periodically lying there I don’t know; it’s hard and doesn’t give good visibility. Perhaps it’s because no one else goes there. 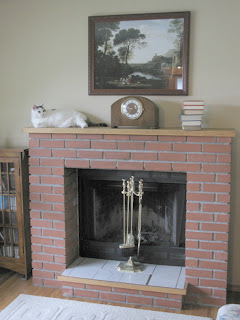 Finally, Tucker too has his spots. He likes the tops of the cat-trees, usually the shorter of the two in the sitting room. Uniquely, he prefers the middle level for sleeping; though he sometimes snoozes farther up, he likes the half-way mark. 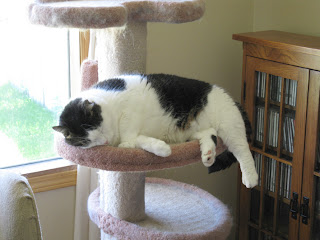 He likes the armchair, as well, the thick cushion and arms give him plenty of scope for different positions. But my roly poly one is not ambitious. Another sign of this is the fact that he will simply lie on the floor, on rug or hardwood. Perhaps his chubbiness provides the padding that is otherwise lacking. In the summer, the fresh air of an open window beckons Tucker, and he lies on the sill as much as on a cat-tree's platform. In any case, his choices of places to relax are as easy-going as he is. 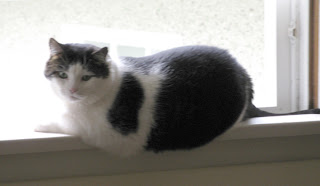 How a cat behaves is indicative of how he feels about his environment. When they moved with me from the old apartment to the new house, the beasts were apprehensive but, because I was there, and familiar furniture and toys came with us, they gave the change a chance. They soon settled in and found their places. Few things can delight me more than seeing my cats lying at their ease about our home, obviously feeling safe and content. 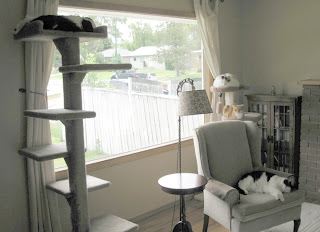