The Adventures of Luther

Luther, my foster-cat, is doing well, and I am getting to know more about this energetic little fellow. His age is estimated to be about a year, and he certainly has the enthusiasm of a kitten, though his size and weight are an adult’s. 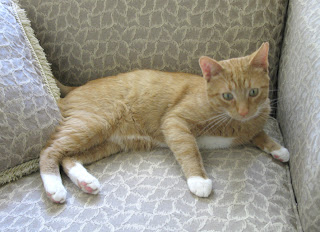 He loves to play and talk, more of the latter than the former, in fact. I think he is the feline equivalent of a human who must verbalize all his thoughts. He issues little grunts all the time, and not just when he’s seeking attention. He will be lying peacefully - he does that, sometimes - then come out with a grunt, as if he were thinking of something and suddenly came to a realisation about it. But he loves to talk to people, though I’m sure it’s frustrating to him because I - the only person he sees regularly or frequently - don’t know him well enough to comprehend what he wants much of the time. I do know that when there is a closed door, he wants it open. That one is easy. 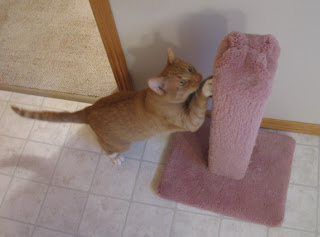 He enjoys playing, too, as I mentioned. He’s very active. He likes the string-toy the best, running after it, lying in wait for it to come by and leaping for it. He also likes playing with fuzzy mice near a scratching post. He will wrap himself around the post, between it and the wall, then want you to toss him a toy. He will then kick and bite and chew, and, not infrequently, run away at high-speed. 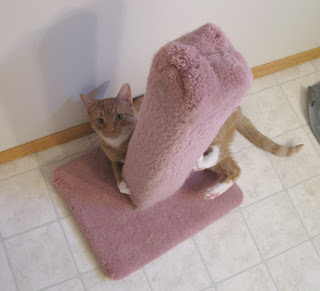 Luther will meow and fuss while I have a shower. He will stand on his hind legs and pound the walls of the shower-stall. He dislikes closed doors, and the stall door is closed at that time. When I am finished, he pokes his head into the stall to find out what the attraction was.

Like all cats, he loves watching out a window. When the window is open, he will lean forward on his elbows and observe. He is not an inveterate observer, though, as is Renn, nor is he largely indifferent to his exterior environment, like Tungsten. It’s a quiet time for Luther, really, when he watches the wide world. He spent an unknown time outside before he was rescued; nonetheless, other than a generic dislike of all closed doors, no matter where they lead, he has shown no inclination to leave the comfort of soft furniture, supplied food and safety at night. 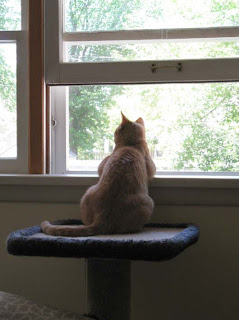 I do regret that my foster-cat is still largely quarantined. He spends his nights in the bathroom downstairs and his days, when I am at work, in the back parlour. There, at least, he has a window open to a screen, with a good view, fresh air and smells; a bowl of water, a small supply of food (to keep him from starving but not enough to spoil his dinner), his litter-box and soft cushions. I cannot let him out unsupervised among the other cats. 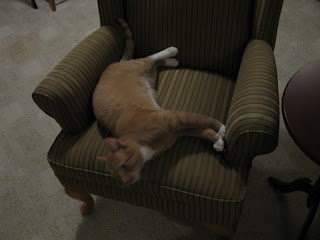 Luther continues to attack my perma-cats. He does it without any malice, without growling or hissing. It has been suggested that he is trying to play. I suspect that is not the case, since the reaction he induces is violent enough to let him know that no one else is playing. He launches himself at all the others, regardless of who they are or where they are. He merely has to see them. I do allow him to roam the house on my days off, though I can’t do it for long; he requires continuous surveillance as he will throw himself at one of the others if he is given the slightest opportunity. Fortunately, his intentions are usually transparent. 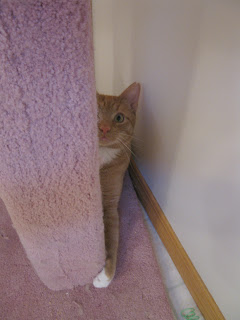 I do not want this to inhibit his possible adoption, however. Another cat may not provoke the same reaction in Luther - or may give him a lesson that will alter his behaviour, though I wouldn’t like to see a cat-fight that bad. In truth, Luther would be perfect for a single-cat household. He is wonderful with people and, in fact, would provide so much entertainment that a prospective adopter probably would not have time for another cat. He’s a joyous way to pass a day. In the evening, as he tires, he will lie beside someone and relax under petting and stroking. 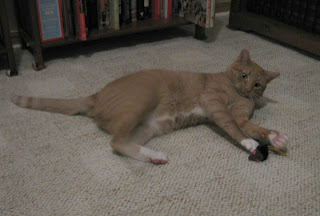 His appetite is excellent, his litter-box habits just as good. He could be let loose in a house (with doors closed and windows secured, of course) and he would entertain himself for hours. I’m sure he would sleep on a bed with his person the very first night. Surely there must be someone out there who, unlike myself, feels he must (and has the will-power to) limit himself to one cat. That person would love Luther, and Luther would love him. 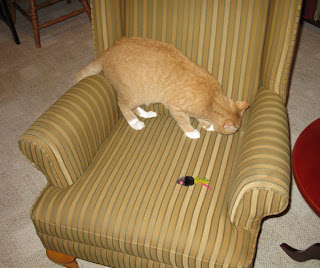 I can’t provide the sort of full and expansive environment this bundle of energy  deserves. He’s content with me, I think, pleased with what he has. But he needs a permanent home and permanent person to be happy. 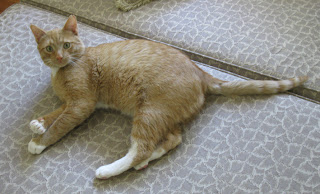