The Most Sensitive Cat in the World

The cat-litter that I’ve bought for the past five years has changed. I buy Feline Fresh. It’s made from pine and may be flushed down the toilet. Lately, however, its composition has become very coarse, the grains so large that they don’t even fall through the tines of the scoop. As well, though it initially clumps when a cat urinates in it, the clump breaks apart as soon as you try to come to grips with it and, unless you are lucky, most of it disintegrates into particles indistinguishable from the unclumped bits. As one person described it, it is now shovelled rather than scooped.

This led me to consider other litters. I tried The World’s Best Cat Litter, made from corn and also able to be flushed. Three of my perma-cats used it with, so far as I know, little hesitation. My foster-cat, Luther, who is as careful of his hygiene as Howard Hughes was in his last days but as fussy as a surfer dude on a sunny day, didn’t bat an eye at using the new product. Tucker is rather more sensitive to changes. 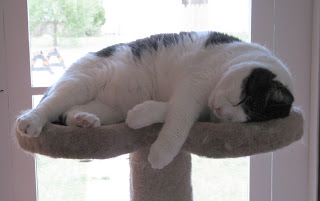 My first clue was when I came downstairs one day and saw Tucker wetting on the carpet. He was doing it in a spot that he had wet in a year or more ago. Another day, I discovered that he had wet upstairs on a mat where, also, he had previously relieved himself. I knew the only change recent enough to have caused this was the alteration in the cat-litter, though of course it could have been other things. After that, he continued to wet outside the box. He also accomplished number two there.

My first attempt at a solution was to confine him in the downstairs bathroom for a day with a litter-box and nothing upholstered or fabric on which to wet. To my satisfaction, he had used the litter-box by the time I returned from work. But that evening, he wet in three places downstairs, none of them in litter and twice on towels laid over old spots to discourage him from doing so again. He was not discouraged. I was, however.

So now a more drastic action has been taken. The cats are barred from the basement - except for Luther, who spends his nights there in isolated comfort. I have to bar all the perma-cats from the basement since to keep Tucker from going there, I must close the door thereto. The litter-boxes - again excepting Luther’s - have been brought upstairs. It’s inconvenient but necessary. The first day, yesterday, no cat used the boxes all day. That evening, on the recommendation of a friend who knows cats well, I placed a litter-box in as remote a corner as the upstairs has. Tucker almost immediately used it, once for each kind of waste removal. This was a small but vital step.

I thought it ironic that I was now worried that the other cats, rather than the roly poly one, were not using the litter-boxes. 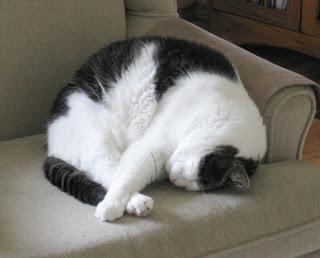 This morning, however, I woke to find that some at least of the other cats had used the boxes. One was Tungsten, who is so tiny that what she produces is correspondingly small compared to the others. Certainly, either Renn or Josie also relieved themselves. Josie, I think, will be the fussiest. She’s a finicky feline, as the commercials used to say, and jumpy. She, Renn and Tungsten were allowed downstairs yesterday at different times to use a box I had kept down there, but, when I checked on the outcome, none had done anything. There are too many smells down there, what with the remnants of Tucker’s indiscretions and my, so far, successful but early attempt to clean after him, using combinations of water, vinegar, hydrogen peroxide, baking soda and dish-washing detergent - and a product called Nature’s Miracle Urine Destroyer; I figured that name has to be the most practical, prosaic and down to earth ever given to a product. Anyway, I was afraid they would find one of Tucker’s spots and figure that’s where they should go now. So all cats - except Luther - are confined to the ground floor until further proof that Tucker likes the litter-box again, which I figure may take a week or two. I’m not taking chances.

The funny thing is that this all stemmed from one scoop of the new cat-litter. I took one scoop and mixed it with a whole litter-box of Feline Fresh, but left a second box untouched. Even when I placed the ‘untainted’ box in a different position, one which Tucker would pass as soon as he came downstairs, he refused to use it. Upstairs is principally hardwood and linoleum flooring; the spot where he wet is no longer covered with a mat. This changes his whole environment and, apparently, his drive to wet on floors.

My roly poly is a very sensitive animal, upset by the smallest deviations from the norm. How long he will need to be excluded from the basement is unknown. But he still purrs readily, still plays and still eats. He squeaks and trills and rubs his head against my leg. He still enjoys life. There is a good side to sensitivity, after all.