I haven’t written much about Josie in the last couple of months. She is unspectacular, if one doesn’t count her girth. She stays low, figuratively speaking, and doesn’t do anything tremendously cute or tremendously bothersome. She’s my little loner. 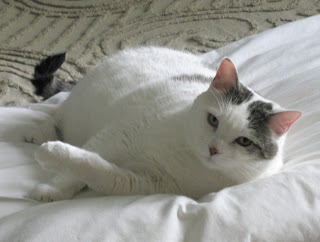 But my Chubs is on my mind as much as the other cats, sometimes more so. I don’t like neglecting her but I do, inadvertently. That’s for two reasons. She doesn’t demand attention in the same way as the other cats and when I do give her attention, it isn’t the kind which may be given while I do other things. Tungsten, Renn and Tucker will lie beside me or, in the case of the first, on me, as I read or listen to music. Josie’s principal hint for petting comes when she ambles near to me, then crashes on to her side. That’s how she asks for my time. 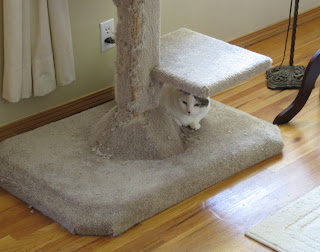 Lately, I’ve been putting her on my lap. And lately she’s been staying. She purrs more than she ever has, and it can be loud, a kind of wheezing trill, like a buffalo trying to be a graceful gazelle. However much she may like my touch more than previously, she still doesn’t care for the proximity of the other cats. A different level on the cat-tree is as close as she likes. 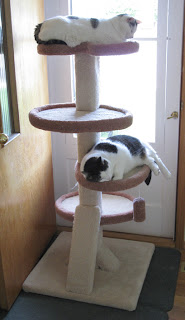 She has taken to waking me with demands for food. This is the result of my new feeding schedule, whereby I make the hard-food bowl available only at certain times, in order to reduce the amount of food my fat cats are eating. This strategy is not working. It has, however, induced my Great White to wake me quite early, squeaking and walking over my back and head in the bed. She will stare at me, purring, evidently finding great enjoyment in disturbing my rest. When I tell her that it’s not time to get up, she gets off the bed, then gets back on - repeatedly. I get angry at her for it, but she seems to be deriving an amount of entertainment from my discomfort; ironically, that makes it difficult for me to be annoyed with her for too long. 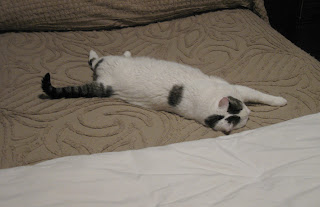 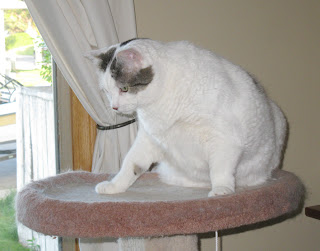 Now that it’s September, the cool weather will be coming ‘ere long. That means the heated cat-beds will be brought out, something I’m sure Josie will like. She clung to them longer in the spring than any of the others used them. I am able to insert cat-bed heating pads under their cushions, but I won’t use those until the cold weather really sets in. I think Josie favours the parapet that surrounds the bed just as much as its warmth. When a cat is as round as she is, such an addition helps contain her. And it’s funny for me to see. 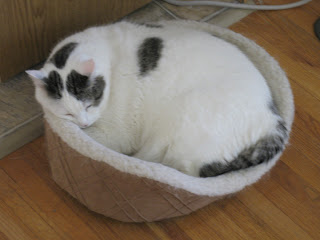 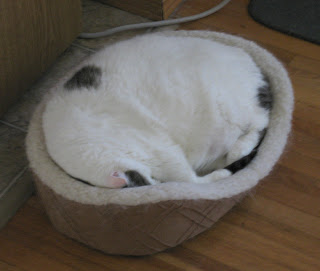 So my Chubs continues to move under the radar, which is, one would think, hard for a cat her size to do. But she is unobtrusive, snoozing on her high cat-tree, squealing when I tell her it’s time for dinner and periodically functioning as my hostess, greeting visitors who come to see me. On Christmas Eve, she’ll have been with me for four years. As with the others, it seems as if I’ve always had her. Hopefully, I always will. 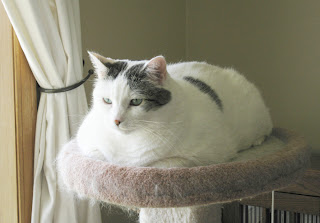