Bored on the Inside

I can’t help thinking that my cats are bored much of the time. I try to entertain them with play, I give them toys, a friend kindly supplied them with the Undercover Mouse machine, they have windows out of which to look, and, periodically, they can annoy each other, and me. But, for the most part, they seemed sated with what their small world has to offer. The house is all they have, and the great outdoors beckons them through the windows, tempting them with all the variety of an undiscovered country.

I see other cats who are allowed to go outside. A number of those who feature in other blogs are outside/inside animals. They seem to fare well, but I can’t believe mine would. Let’s take a look at the individuals, and consider their chances in the wilds.

Tungsten would probably do the best. She is a tough little cat, who will stand up for her rights. But she is indeed a tiny creature, and weighs less than the fur on her back. As I discovered from previous foster-cats, my orange one realises that her size limits her dominance of any situation. She will hiss and growl, and even fight, if necessary. But she knows that she will be bested by cats larger than herself. This doesn’t keep her from confronting them, but it will keep her from defeating them. Therefore, Tungsten should stay indoors. 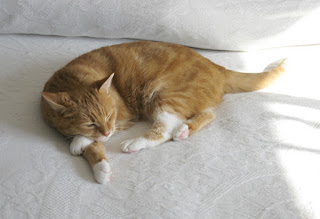 Renn is a big, strong animal. His muscles bulge when he climbs up a cat-tree; he is swift and powerful. He is also timid. When an automobile pulls up outside the house, he growls and hurries for the shelter of the bedroom. He comes out quickly when the visit is over. If the visitor is a friend he will rejoin me to welcome our guest. But, though he becomes braver every day, he still fears the world a great deal. He could, if it came to a matter of survival, beat most opponents. But I don’t believe my big boy would stand up to the battle, unless he had no choice. His share of spoils in the wild would be small, and he would go hungry. Therefore, Renn should stay indoors. 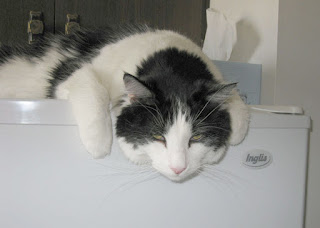 Josie puts up with little nonsense. My Chubs doesn’t have a great sense of humour, and her life revolves around the basics of food, water and sleep. She plays, but I don’t see much laughter in it. She is a practical cat. Josie would know how to survive outside. Yet knowledge and practice are not identical. She is fat. There is no evading the fact. She can run, but not fast. She can jump, but not high. She can fight, but not with great agility. She is more likely to be a meal than gain access to one. A feral animal would look at her and see only an immense dish of Fancy Feast in a white coat with tabby spots. Therefore, Josie should stay indoors. 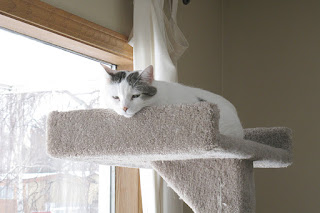 Finally, there’s Tucker. My roly poly one is shaped like a sausage, and has the personality of a happy, mischievous child. He is strong, and quick for his size. He has fortitude, and has rebounded heroically from adverisity, retaining his hair-trigger purr through it all. Yet this quality would enable him to suffer well, not survive well. He, like Renn, is easily frightened: though he knows I will not harm him, he still sometimes scurries past me as if expecting trouble. He almost expects to be frightened in any given situation, and bows to any powerful personality that confronts him. He would wait on the edge of a feeding circle, hoping for a scrap of sustenance, and be disappointed. Therefore, Tucker should stay indoors. 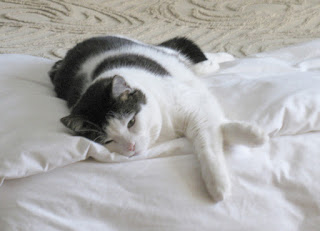 There are my four cats. I promised the rescue-group from whom I adopted them that they would remain indoor cats. But beyond my word, there is my concern. The quartet would not do well outside. I don’t think I merely flatter myself that only I stand between them and destruction. It is, unfortunately, true. They must remain inside, bored but safe, wistfully peering through window panes at what they may never have. I think they are happy most of the time, or at least content. But once in a while, watching the world at large, seeing what they may never share, they are, I think, bored on the inside.