Of Health and Medicine

My oldest cat Tungsten is on medication, and likely will be for the rest of her life. She has hyperthyroidism.

This condition is caused by a non-cancerous tumour on the thyroid gland, and makes the metabolism speed up. I had been noticing that Tungsten was eating more food recently, and actually coming to me before the usual soft-food feeding times and demanding that I get the nourishment ready. That was very unlike her. She had always consumed too small an amount of food, to my mind. She was a nibbler. Lately, she had started eating everything in her dish and then some. I would feed her as much as she wished, since I wanted her to gain weight. But the quantity she was eating, and wanting, worried me. I took her to the veterinary. 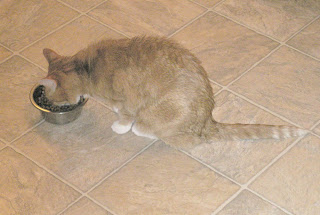 The doctor was worried that Tungsten was suffering from hyperthyroidism. The symptoms include an unusually strong appetite but no accompanying increase in weight. In fact, the weight may go down. This was exactly what was happening with Tungsten. Other symptoms are an increasingly scruffy coat, vomiting, diarrhea and excessive energy. Naturally, all of these signs will likely not occur at once or all in the same cat. The orange one is a ‘borderline’ case. The healthy range of ‘T4’, which is what is measured to determine hyperthyroidism, is from, I think, twelve to sixty. Tungsten came in at 59.4. Her condition is not severe but, weighing only two and a half kilograms now, even a little weight-loss on her part is dangerous. 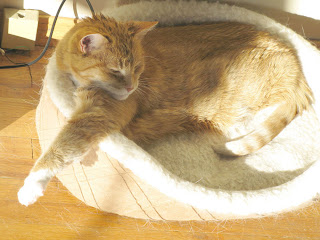 What to do about the tiny terror? The doctor stated that she could be started on medicine immediately, or after a month, followed by new tests. This second option was to give any abnormalities in reading the first results to clear themselves. I decide to take that alternative, but to use it to give Tungsten a natural medicine for the hyperthyroidism. The medicine is called Thyroid Support Gold, formerly titled Resythro. It is made from herbs and other plants, such as all-heal and motherwort. According to Tungsten, it tastes horrible. But it is supposed to help her condition. I will give it a month and if it doesn’t lower her T4 numbers, I will switch to the chemical medicine. 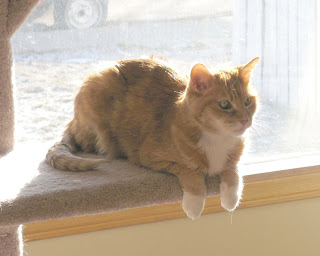 This chemical medicine is called methimazole, marketed under the brand-name Tapazole. A cat in the rescue-group with which I volunteer is being treated with it; she has a much worse case of hyperthyroidism than Tungsten. I'll let you know how that situation proceeds. The advantage to this medicine is that in addition to coming in the form of pills, it can be purchased as a gel that is rubbed on the animal’s ear, a much less worrisome form of application than ingestion. The disadvantage of which I have heard is that it can, in some cats, cause kidney damage. But Tungsten is twelve and a half (the average age of a cat who is found to be hyperthyroidic is thirteen) so if kidney damage results, it may take so long that old age will be more of a bother to my orange one. 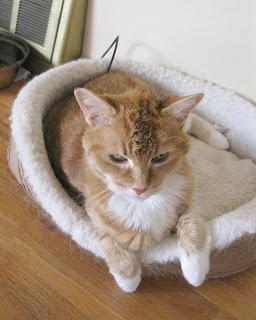 There is another treatment for hyperthyroidism. This is radioactive iodine. I believe it is applied surgically. It is a one-time treatment, though it is expensive. The price I was quoted was $2,100, and may not be done in all towns. I would have to take Tungsten to Calgary, a couple of hours away, for the application. In my little one’s case, the accumulated cost of medicine given daily may be less before, once again, old age intervenes. I figured out the price of surgery versus pills, and it worked out that the pills would be more costly than the other treatment only after eight years. Tungsten will be twenty by then. Of course, I hope that she will live to be much older than that, but it makes the question of treatment a matter of six of one, half a dozen of the other.

If the Thyroid Support Gold does not work, I’ve decided to try the gel-form of methimazole. 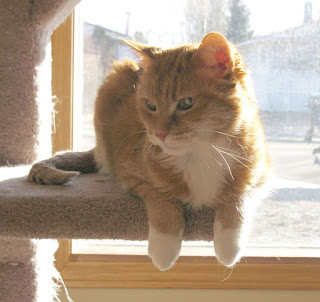 Until then, I will continue to give Tungsten as much food as she likes. I have a bowl of hard food on top of the refrigerator for when I am not present; she, and sometimes Renn, if he stirs his lazy bones enough, can reach it, but not my two fatties. Tungsten does seem to be feeling the effects of age, in that her leaps to the counter and then to the top of the refrigerator are not as graceful or easy as they had been. Besides, she prefers the soft-food these days.

I hope the medicine, whichever it may be, will reverse the effects of the hyperthyroidism, and Tungsten will start to regain some of her lost poundage. She is so little that she doesn’t have much to lose. Yet she herself is a great deal to lose. 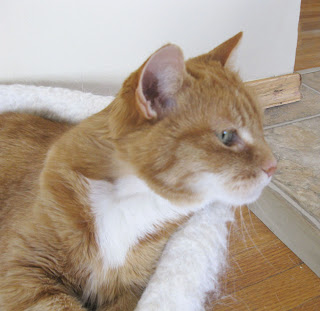