Bear-Bear is settling in very well. My previous fostering had been ordeals in some ways, though the cats I took care of were little wonders of affection. Luther and Rachael each had their troubles dealing with my perma-cats. Yet I must have had good integrations previously, since I kept two of the cats I fostered, Renn and Tucker. Bear-Bear is doing as well, if not better, than they did. 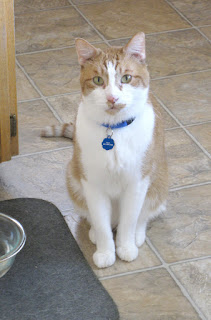 He is completely without aggression of even the most playful kind. Josie, as I mentioned in an earlier article, has taken easily to him. Tungsten hates him, while the boys are less accepting than my Chubs but more willing to give the new fellow a chance than is my orange one.

Tucker, to my surprise, is almost unaffected by Bear-Bear’s presence. The roly poly is a very sensitive cat, yet allows Bear-Bear to wander about, even to within a few feet of him, without reacting. If he were truly afraid of, or angry at, Bear-Bear, Tucker would stay hidden from him. Yet he has flopped down in the middle of the sitting room rug, while the guest-cat explores. He hisses at him if the approach is too close, but that is to be expected. Tucker has transferred some hostility to Josie; as I recall, he did the same when other foster-cats came to stay. He hisses at Josie, which he normally does not, and they come to blows from time to time. But this will pass. 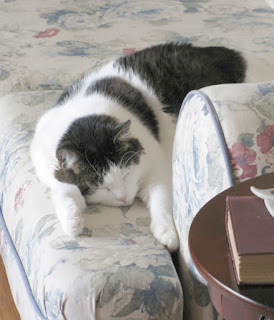 Renn’s reaction to Bear-Bear is interesting. He too hisses and growls at any proximity, yet he appears fascinated by the newcomer. My big boy could stay in the bedroom (the door of which is always open now, not closed to provide an inviolable refuge for the perma-cats) or at the top of a cat-tree, if he wanted to avoid Bear-Bear. He does not. Even when he tells the new boy he dislikes him, then slinks cautiously away, Renn will return a moment later to watch whatever Bear-Bear is doing. 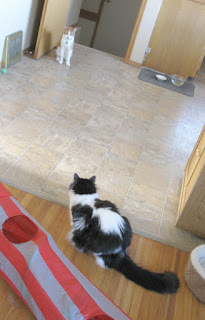 As one of the ladies who works in the rescue-group with which I volunteer stated, my cats probably pick up on the easy-going personality Bear-Bear possesses, and realise that he is without any aggression. They understand instinctively that they don’t need to fear him, or even keep an eye on him. Tucker and Josie will close their eyes and snooze, even as the guest-cat wanders about. He may be an annoyance to them right now, an inconvenience, but not a danger. 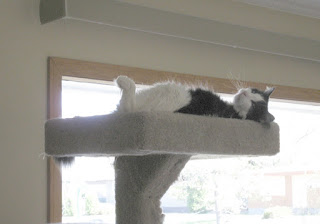 Saturday night will be interesting. That’s traditionally movie-night at my household, and Renn likes to watch a film with me (ie. he slumbers on the couch next to me.) Will he brave the parlour to do so this time? He has come into the parlour, where Bear-Bear sleeps and is still kept isolated some of the time. He sniffs and looks out the window, but only when Bear-Bear is elsewhere. The lure of movie-time is strong for Renn; he hurries into the parlour even before I arrive with my popcorn - and no, it’s not the food that draws him; he doesn’t seem to care for popcorn, thank goodness. So what will he do this week? Tucker, too, comes in after the movie has started and sleeps on the ottoman. What will he do? It will all depend, I think, on what Bear-Bear does. 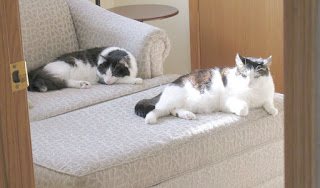