Tungsten’s eating has always been a concern to me, never more so than now. She has hyperthyroidism, and has been receiving medicine for it for a couple of months. For a while thereafter, she had been gaining weight, a small amount, but still a gain. That momentum has ceased and she has remained stalled at 2.63 kilograms.

Consequently, I am worried about her not eating enough even to maintain the little weight she has. She seems to be hungrier than she has been, which makes me think she may be sliding back on her recovery. I will continue to weigh her and if her poundage reduces still further, will consult the veterinary about it. 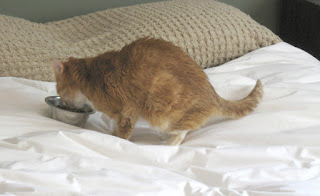 In the meantime, I am taking extraordinary steps. My new foster-feline, Bear-Bear, is doing very well integrating with the perma-cats, with the exception of Tungsten, who still hates him. She spends much of her time snoozing on the bed, where Bear-Bear, polite fellow that he is, does not venture. I think he is also afraid of the tiny terror, which is fine by me. It may be that that has caused Tungsten not always to come to the dining room to get her meals, though since she will brave the new boy’s presence when something special is in the air (eg. the aroma of potato chips or ice cream), I think she is just being lazy. So I bring food to her.

I may be too indulgent. I may be spoiling the orange one. But I'll provide her a dish of food even when it’s not the regular meal times, in order to get her to eat as much as possible. And if having her gain weight means an extra effort on my part, then I would go to the moon to bring her nourishment. She’s the household’s top-cat, and we can’t do without her. 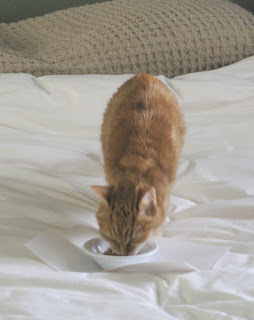