Saturday in the Apartment with Echo


At last, during the weekend, I had time to play with Echo. I have tired her out with a string-toy and watched her have fun with a fuzzy mouse, which I found at one point in a water-bowl. I was able to spend time with her quietly, as well. We watched a movie together Saturday night, though the first half consisted of me fending off a moocher who wanted my popcorn. It was like a cartoon in which a creature is pushed back from one direction only to appear coming from another, slipping under an arm, over a hand, down a shoulder. She did calm herself after a while, though I think we both had the same poor opinion of the night’s film. 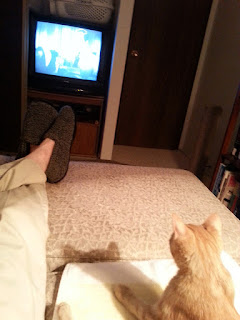 I was able to take some photographs that were not blurry, though these are the pick of about a hundred that were. This is Echo, first, looking bored, then interested. 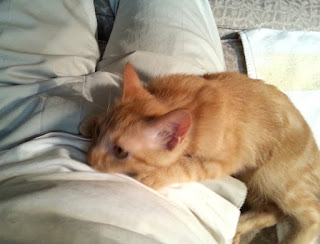 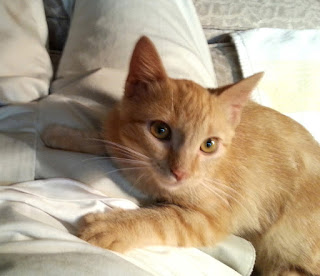 This close-up shows her beautiful eyes, which are amber, not gold. She rolled over soon afterward and drifted off to sleep. 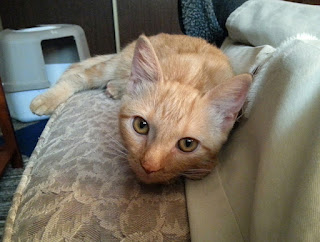 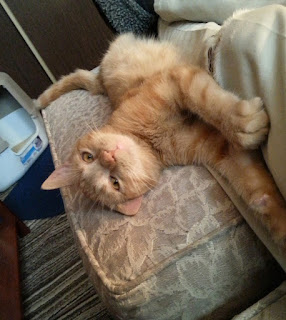 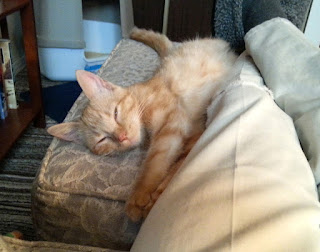 And then, over on the other side of the human, she snoozed some more… 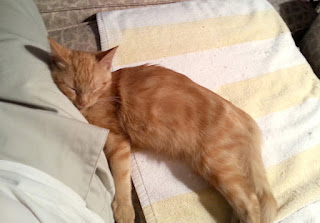 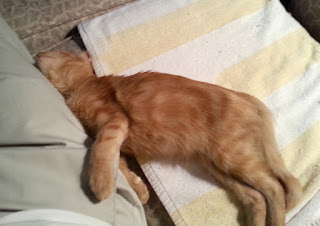 I have a number of questions to ask the veterinary on Tuesday, including inquiries regarding feeding. So far, I have been giving Echo food when the other beasts are fed, and providing her with a bowl of hard kernels to nibble through the day and night. A growing kitten can’t be allowed to go hungry. This will, I think, be satisfactory for a few days. But if she is to stay with me longer, I need a better plan for her menu.

That raises another point. I know that a number of my blog’s readers have expressed a strong hope that Echo will remain with me, if not permanently, then as a long-term foster-cat. There is, in fact, a chance of her going to another foster-home. A very nice young woman is currently fostering a cat whom, she believes, would benefit from feline company of the rambunctious sort. Certainly, Echo needs more time than I can devote to her right now, and she needs a situation that will allow her the best outlet for her juvenile energy. This may be perfect for her.

This possibility is, for the moment, just that. There will be a home-visit by a PAW Society representative to the prospective foster-home, and an interview. But the woman in question works with a respected individual who has fostered for, and adopted from, the PAW Society in the past, so I think the situation will be a good one.

Until then, and, if that possibility falls through, afterward, Echo is welcome here. She will be cared for to the best of my ability, and be a part of the household. Whatever this little cat’s future, it will be happy one. 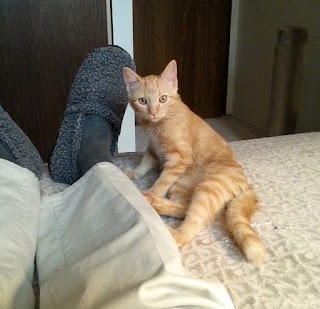