Cammie continues poorly. She ate a little yesterday, and I forced some Recovery-and-water into her by syringe. She threw up after attempting to eat some hard-food on her own. I gave her half of the Cerenia pill I had brought home from the veterinary hospital, and soon after that was when I gave her the Recovery. It stayed down, as did some more of the same later on. So she had some nutrition, though of course not nearly enough.

During the night, she threw up again. I gave her the other half of the Cerenia this morning, but that was puked up again very soon after. Nothing is staying down right now. I am taking her to the hospital in an hour and a half. Unfortunately, there is no one on call at our regular hospital, so I had to make an appointment at the local emergency clinic, which is much more expensive. However, it needs to be done.

This is her worst episode. Each time she vomits, she is more reluctant to eat. I am sure she is hungry, as evinced by her small efforts to consume hard-food last night. Previously, a single shot of Cerenia had been enough to put her digestion back on course; not this time.

Thank you for all your thoughts regarding my princess. She is locked in the bathroom, since she hides a great deal now, and I want to be able to catch her easily for transportation to her appointment. Her spirit remains good, even in her misery. I just spent a half-hour with her, and she lie on my chest, purring. Continued wishes for her health would not be unappreciated. 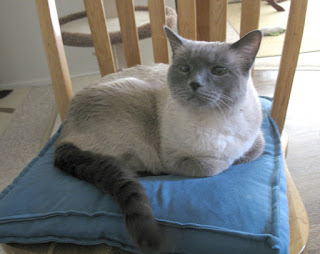