Circumstances change, as do situations. I have found that with the coming and going of the seasons, my cats’ behaviour patterns alter. They sleep in different places, they are more or less active. Most Saturday nights, when I have my bath, Renn comes into the bathroom and keeps me company while the tub fills. Sometimes he stays afterward, sometimes not. But lately, he has been a little slack in his ablutionary accompaniment. Instead, someone new has been investigating the process. 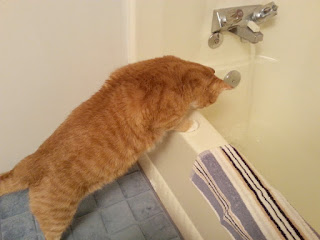 While Renn seems to enjoy the sound and warmth of the rushing water falling into the tub, Parker wanted to see what was actually happening. He may not have experienced such a thing before. I was afraid a couple of times that he was about to jump in. That would have been a disaster for both of us. But he restricted himself to observation, and later settled down on my slippers. Eventually, he left and lie down, apparently on guard, at the threshold to the bathroom. 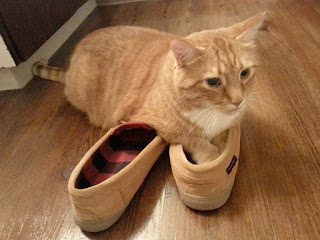 There is always something of interest going on when you have cats.