When is Esau Not Esau?

I received word from the woman caring for Esau last night. I was immediately confronted by a problem. It seems that in my haste to keep him alive, I incorrectly judged Esau’s gender. It turns out that he is a she. It matters little at this point, of course, but will be of some importance in a few months. As well, the little survivor needed a new name. The biblical Esau and Jacob did not have a sister, so I chose the name of one of the former’s wives. Let me introduce – or re-introduce – Adah. 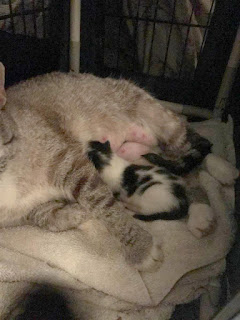 At one week of age, the tiny one is still tiny, but growing. Clearly, the generous cat who is providing surrogate parenthood for Adah is full of nutrition, as well as kindness. The woman caring for them says that Adah’s eyes are beginning to open. There is little else to report at this time as, I imagine, all Adah does is sleep, eat and flail about a bit. But, considering that it was an open question as to whether she’d survive just seven days ago, I think that’s enough to ask of the little creature. And I suspect that she eats, sleeps and flails about quite well, thank you very much.
Posted by John Bellen at 2:19 PM