It was long odds, to say the least.

I was representing the PAW Society in the efforts to trap Adah’s mother. She had had one litter (hopefully, just the one) for whom she was too young to care properly. It would not be long until she was pregnant again. We wanted to catch her, and give her permanent respite from such a fate. The early mornings and early evenings were the best times. Each day, I set the trap, and today was no different. I bicycled out to my work-place (not really something I like to do on a day off) four times to check on the situation; we couldn’t leave a cat in the trap too long – assuming we caught anyone. But three times, I saw an empty trap - a discouraging sight in such a case. 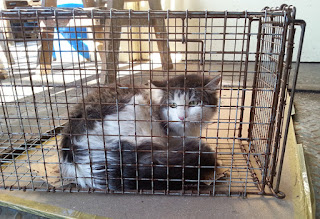 About 7.30, I rode out again. As I approached, I could see the trap had been sprung. Who had we caught? I asked myself. The feral colony behind my work-place was subjected to a trapping operation some time before, and most of the cats there are fixed. The unhappy cat in the cage could be one of those: a wasted effort, from our perspective. It could be one of the fewer cats who needed fixing; that would be a small chance, but possible. The notion that it would be Adah’s mum was unlikely. 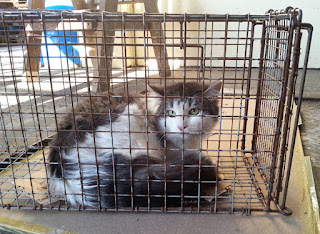 There she was: Adah’s mother. Displeased and frightened, but on the verge of a better life. We have named her Rebecca. In the Bible, Rebecca was the mother of Jacob and Esau. In our more complicated situation, Rebbeca is the mother of Seraph and Jacob, alas passed away, and of Adah, formerly Esau. If Jacob had survived, and Adah had remained male, Rebecca’s name would have been more fitting. But, all things considered, and all obstacles considered, I think things have worked out rather well. 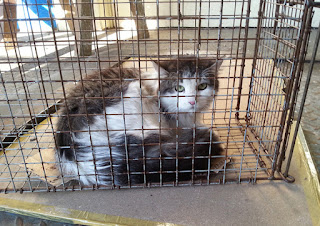 Rebecca will be spending some time calming down in the home of an experienced fellow PAW member. A veterinary appointment will be made, though that may yet be a few days. But this little cat is now safe; she will eat, she will sleep, little dreaming how her life has just improved.
Posted by John Bellen at 8:54 PM